Underwater Drones – How They Work In 7 Easy Points: 2022 Guide

So, you have seen our drone buying guide and how a drone works articles, and you ask yourself, what about underwater drones? There has been a long time that people considered drones for military use only. However, drones have been swarming the market for some time now, and it was only a matter of time for underwater drones to become a consumer product. Well, now the time has arrived. We are in the era of drones, and can freely buy one, even underwater ones, for personal applications.

You may have seen them bobbing back up to the surface at your local lake and wondered to yourself; I wonder if I can get one of those? Well, the answer is yes, you can. One thing that you are going to have to prepare yourself for, though, is the price. As they are pretty new to the market, they are not cheap. 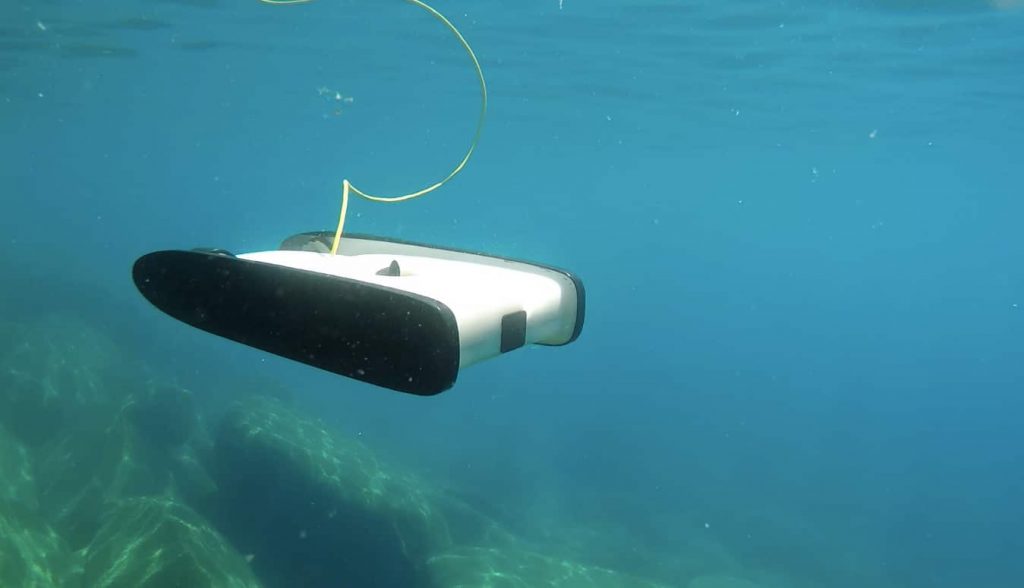 Although they are not cheap, they offer some exceptional benefits. Some of the hobby underwater drones that are currently on the market can dive to an impressive 100 meters. Doing a quick search for scuba diving lessons will make you see that a 5-day course to become privately certified in scuba diving will take you around five days, and cost you around $1500. That price is without any equipment.

While some people may like the idea of taking to the waters themselves, you could spend the same money, and get a similar experience without the training and extra costs. So, the real question is, why wouldn’t you buy one?

While searching the internet for underwater drones, you have probably stumbled on a lot of information about professional ROVs (Remotely Operated Vehicles) and found yourself thinking that they are the only things that you can buy. However, that is not the case either. In this section, we look at the differences between the two and see which is right for you. If you would like a quick answer to this question: You want a hobby ROV. If you want a little bit of a more detailed explanation, then read on.

Professional underwater drones are capable of reaching depths that divers are unable to reach. More often than not, they are safe alternatives for divers in various industries such as the military, offshore inspection, archaeological exploration, and rescue missions. The price of these is usually far away from the general consumer budget, costing more than some cars. For example, Revolution ROV Underwater Drone.

This section of the article is where most people will want to look. Hobby ROVs are starting to become more available and widespread as time goes on. It is understandable why, too. Humans are innately, curious creatures. According to the National Ocean Service, more than eighty percent of the ocean is unmapped, unobserved, and unexplored. So, making remote-controlled camera submersibles is the next obvious step in the human exploration quest.

How Do Underwater Drones Work?

If you have ever googled the term, how do underwater drones work, not a lot will have met you. But actually, there is not a lot of technology that needs to go into them for moving them. Take this next image of the Trident, for example: 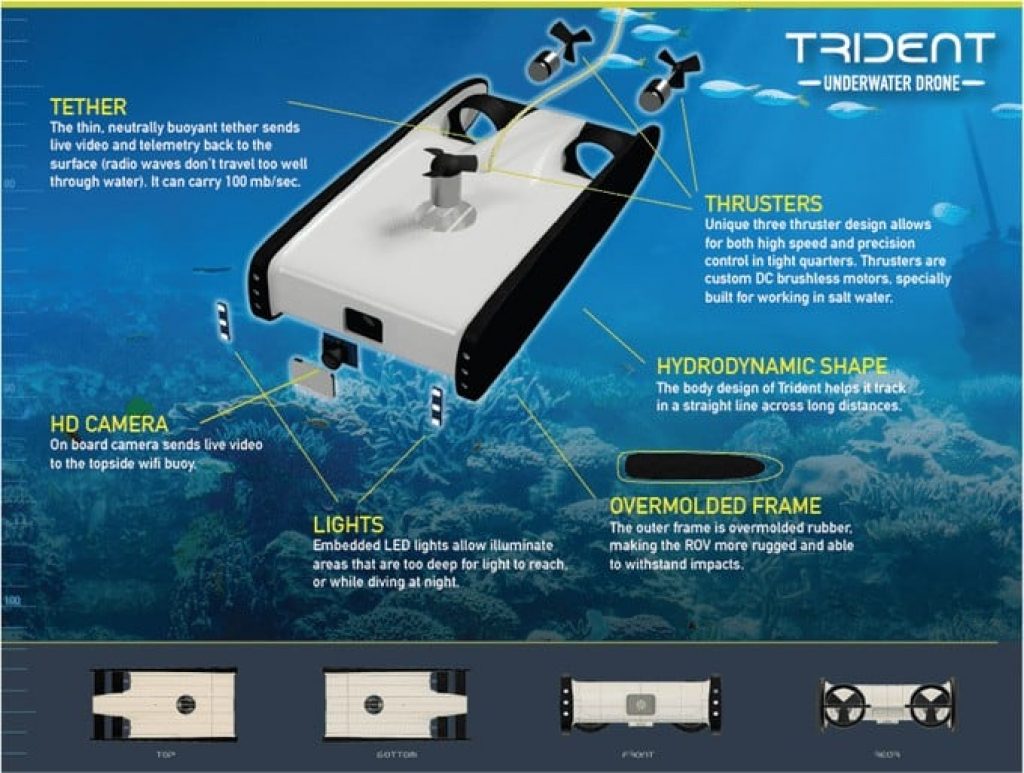 As you can see in the image above, there are only five main components to the most common, tethered underwater drone. While there are untethered variants available, they are a lot more challenging to use and more expensive. We will take a quick look at the later on in the article.

Components of an Underwater Drone

As I have just said, there are a lot fewer components to an underwater drone than you may think:

As you can see, there are not a lot of components in the average underwater drone. I will still explain how they work, though. First of all, you need to know that the actual drone and the tether are both buoyancy neutral. That means that no matter where you put them in water, they will stay still. Providing that there are no water movements, currents, etc.

Unlike air drones, underwater ones are much more simple to move forward and backward. The two thrusters on the rear of the craft create that movement on their own. As you saw in that same article, angular momentum has a large part to play in moving and stabilizing drones. The same goes for ROVs. Therefore, to create an angular momentum of 0, the two propellers turn in opposite directions. If they both turned in one direction, you would have a barrel rolling drone that you could not control.

To make the Trident go forwards, the rear left truster (when looked at from behind) turns counterclockwise, and the right turns clockwise. Conversely, to make it go backward, we reverse the rotation of both.

Turning is a lot easier with an ROV than air drones, too. If you want to turn left, you slow the left motor. If you’re going to turn right, you slow the right. However, a point to note is that you can not turn these without them moving forwards. That can make it challenging to learn the controls, but you will get used to it pretty quickly.

Because of the angular momentum law, you will get some roll when you turn, but it is not anywhere near as much as you would get on an air drone with no compensation.

The vertical movement of an underwater drone is usually completed by one central thruster. As you can see on the Trident, it is above the body itself. However, some are integral to the body. I think that the interior style is a little bit better, as you are less likely to break the blades or stem.

On the Trident, spinning the top thruster clockwise (as seen from above) will lower the front of the drone. Therefore, turning it counterclockwise will raise the front.

That’s as complicated as it gets – for now. The controls will get more complicated if and when we see the integration of sideways movements into the system. But I predict that there will only be one more thruster inserted into the case in the center going from one side to the other.

The physical controls of an underwater drone are very similar to an air drone. To control them, you can either use a mobile device or a dedicated controller. However, the difference is, as I have said, radio frequencies have a hard time passing through water. To counteract that, and still keep the mobility of the person using the drone, they use a wireless receiver connected to the drone via the tether – called the base station. Then you have a wireless controller that communicates in the usual way to the receiver.

Depending on which underwater drone you buy, you will have different lengths of wiring and different diving depths. However, the most common maximum dive depth is 100m, and the cables rarely exceed 150m.

As you have seen, at this moment in time, there is not a lot to an underwater drone. They are still very expensive, though. One other point to note is that the outer shell that you see is usually a facade, and is not the waterproof, inner workings. While I do not recommend this, you can take the outer case off and see that the interior looks a lot more like a submarine than it does with it on.