How A Drone Works – 8 Simple Explanations for 2022

In this article, we are going to look at how a drone works. As you have seen throughout our last drone articles, they are becoming more and more popular as they become more readily available. However, it is still nice to know how a drone works, even if you do not need to know. Some drones are very easy to fly, while some are a lot more difficult. You may think that the difficulty is going to increase with the price. However, I believe that you may find it the opposite way around.

If you have ever flown a toy drone, you may have found that they’re quite challenging to make them do what you want them to do. However, if you have ever experienced flying a top of the line, professional drone, there are more controls, but they are often a lot easier to control. The reason for that is because a lot more technology goes into a more expensive, professional drone than into a toy.

However, that still has not answered the question about how a drone works.

How A Drone Works

If you have a drone, take a look at the blades of it. If not, look at a fan blade, or look at the next image. Seeing it for yourself will help you to understand the principle, but if you have no fan or anything, then try to imagine it.

In the image above, we have taken a cross-section of a blade from an airplane. However, the theory is the same for all air moving blades, including cooling fans and drones. As the blade moves through the air, air is moved across it in the way shown. By the shape of the blades, the force created first is the high pressure, low-velocity airflow that you can see in red, at the bottom of the blade.

After initial take-off, there are three basic movements that a drone can do by utilizing this law of physics. They can climb, hover or descend. A drone creates all three of these movements by changing the amount of high pressure under the blade. How do we change the amount of pressure, you ask? That is simple, by increasing or decreasing the speed of the rotor. The faster the blade moves through the air, the more the pressure rises under the blade. Thus the lower the pressure above it.

Although lift is a lot more complicated than this general explanation, I will keep it as simple as possible. We calculate the amount of lift in Newtons. However, we can also use kilograms. The amount of lift, in kilograms, will be directly related to the amount of weight that the lift can raise into the air. If a drone weighs one kilogram, you will want motors and blades that can produce more than that to lift it into the air at any speed. The more lift that propellors can create, or the lighter the drone, the faster lift happens.

Now that you know how a drone moves up and down, we will look at how it turns. For this, we will presume that we have a 1kg drone, producing 1kg of lift. You now know, that means that we are currently hovering. So, for ease, we will also presume that your hovering drone is facing away from you. Let’s say that you want to turn the drone to the left. Take a look at the image below and see if you can work it out. 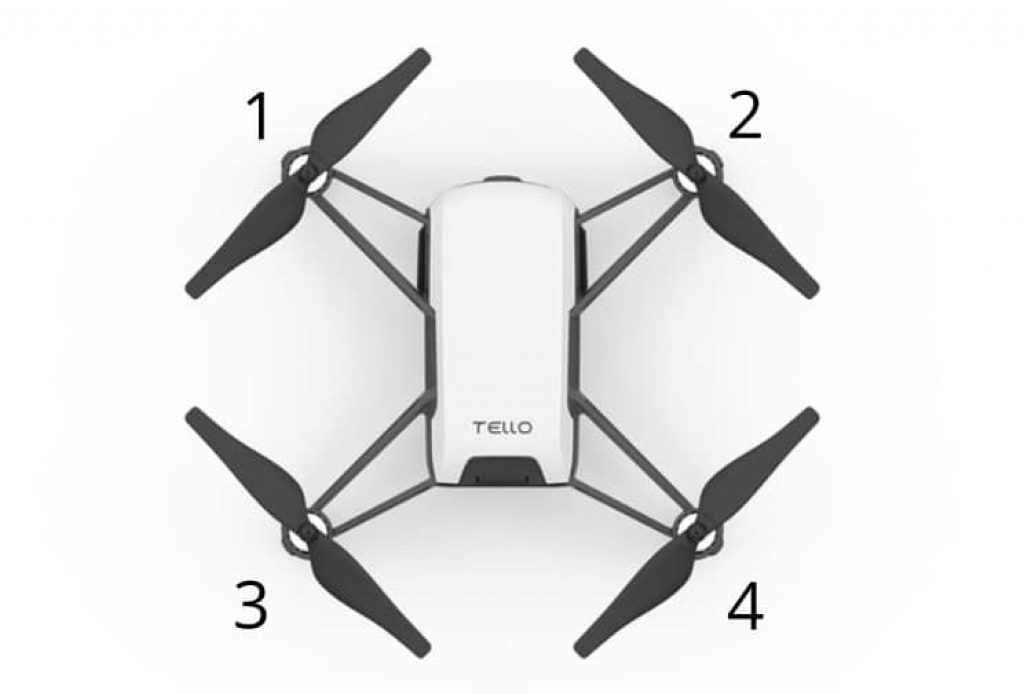 Therefore, when all blades are spinning at the same speed, and producing a lift that equals the weight of the drone, it will stay still. So, before we get into how to turn the drone, I will give a brief explanation of the angular momentum:

So, how do we turn the drone?

At the moment, we have an angular momentum of zero. We have to change that total of zero to a positive or a negative number. We can do that by speeding up or slowing down one of the rotors. So, let’s say you want to turn the drone to the left. We increase the speed of the rotor (2) from -3 to -2. The angular momentum equation above is now +1. Having this angular momentum has to be counteracted in some way to produce zero again.

That is where the drone rotates to the left at a speed of +1. We now have a total momentum of zero, but the drone is rotating to accommodate the loss of energy in the rotor (2). We now run into a problem, though. The amount of lift produced has fallen too. Therefore, we start to get a decrease in height also. Not what we want. To make things worse, the drones tip at rotor (2) will dip. Again, not what we want.

So, we combat that with an increase in rotors (2) and (3) and decrease the speed of (1) and (4). Now the lift remains equal, but the angular momentum is still not zero, so the drone rotates. So, in simple terms:

Linear movement of a drone is a lot more simple than turning and lift. In the case of a quadcopter, no two sides of the drone have blades that rotate in the same direction. Depending if you have a racing or camera drone often changes how we accomplish linear movement. First, we will look at a more “basic” camera drone.

All of the rotors are in a fixed position facing upwards. Therefore, all we need to do to move is to increase or decrease the speed of one side entirely by the same amount. Take another look at the image above. That drone is facing up the page. So, here is the basic concept of how we create movement in any direction:

Depending on the production of the drone, it will often increase two of the rotors and a  decrease in two. That keeps the lift the same, and also stops the battery from draining. If you were only to increase two rotors, you would use more energy, thus reducing your flying time. If you were only to reduce the speed of two, you would not move in any direction very quickly.

Linear movements in a racing drone used to be the same as the above. However, the use of technology and the requirements for speed have altered the design a little bit. Races often last a lot less time than a camera drone will need to fly for, but they also need to go a lot quicker. Therefore, they use tilting rotors, as sen in the image below. 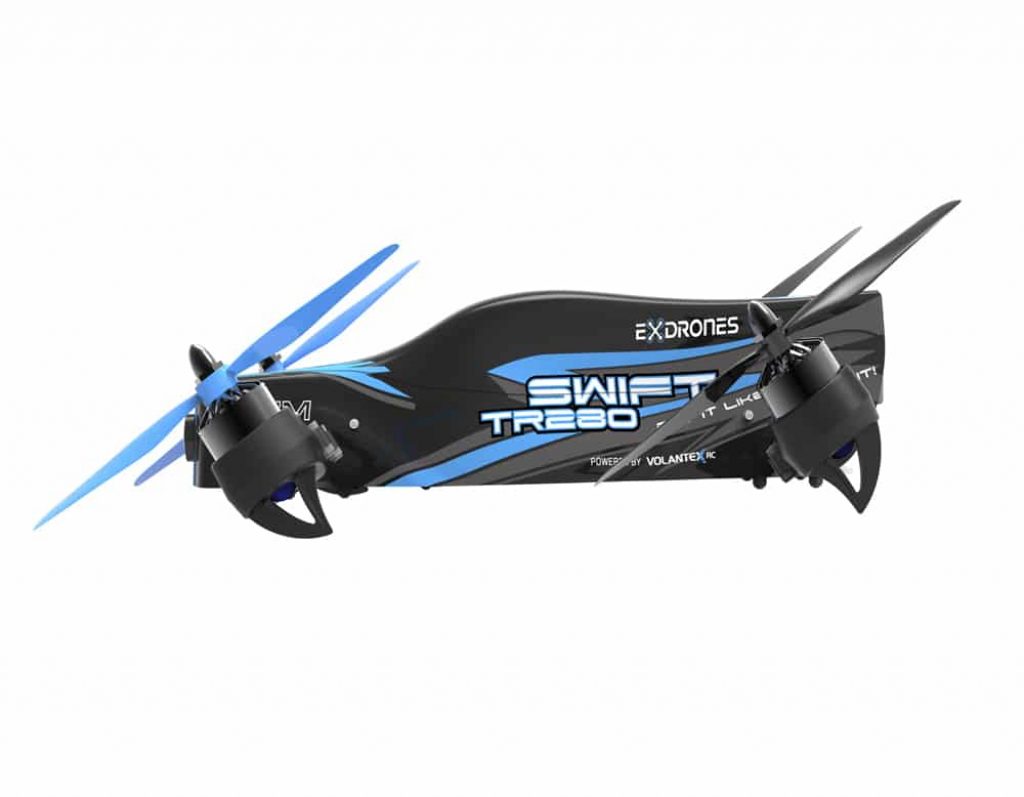 Looking at the image above, the .instant difference that you can see is that the rotors are not pointing directly up. This tilt of the blades allows for a straight body and all four rotors to propel the drone forward. However, there still needs to be a slight tilt on the blades, because if they were to face straight forward, the drone would go very fast forwards, but it would also lose all of its lift and fall to the floor.

Therefore, it still utilizes the same principles as the more “basic” drones to an extent. As for sideways movements, the racing variants of the drones will again increase the speed of the two motors on one side.

As I am sure that you are aware, all of the movements that a drone makes are by regulating the speed of the motors. However, that is not something that you have to control yourself, perse. If you had to adjust the speed of each of the motors, you would have a challenging time. Imagine that you have a drone, like the first one in this article, and a controller with four sticks. Increasing and decreasing the speed of all four motors by the same amount, and at the right ratio for the desired result is going to give you massive headaches, and even more significant repair costs after crashing.

Therefore, a computer chip does all of the calculations for you based on the two sticks that you see on controllers. It is this computer, its quality, and programming that produce the best results. Not only does the drone use computers to control the motors, but the more expensive, high-end ones have accelerometers and gyroscopes to increase stability automatically. If you add a GPS to the drone, you can insert co-ordinates to the computer and let it go itself. That is why your basic toy drone will not be anywhere as near as easy to control as a more expensive one.

However, knowing how a drone works is only half of the fun. Flying one with only some assistance is much more fun than an automated, fly-on-its-own drone.

How Does A Drone Communicate With Its Controller?

So, the final question in this article is, how does a drone communicate with its controller? Well, a drone controller can take many forms now. That can include smartphones, tablets, or the more traditional, game-style controller. However, most new drones work on 2.4GHz radio frequencies. Those frequencies are the same as your home wifi networks. That is part good and part bad. It is good because we know that the frequency works and transmitters and receivers are relatively cheap. However, it is not good because you may have a lot of interference due to the amount of radio waves on the same frequency.

I hope that you have found the information a little bit useful in finding out how a drone works. You can delve much more deeply into the physics of how they work, but you probably don’t need to. When I owned my first drone, I was very intrigued as to how they work, and that prompted me to find out as much as I can. It has made me slightly more capable of flying them, but I think that practice is the best option instead of learning everything here.  If you are looking for a buying guide, make sure you check out our article here.