The Flying Fuck Helicopter is a remote-controlled drone. It consists of two blades and features a FUCK sign made of foam which is attached to the blades. The blades are positioned to provide good stability to the helicopter and to maintain the hovering. The dual blades are positioned in a counter-rotating position.

Remote Control Flying Fuck – What You Should Know? 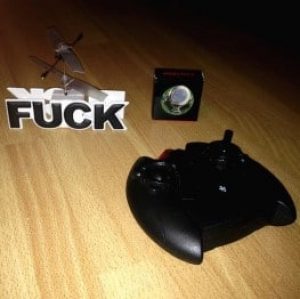 The remote control features a two-channel control, so there are two channels that can control the motion of the helicopter in the remote. The forward movement of the helicopter happens slowly. The controls for hovering and the control for turning left or right are controlled by the user. The helicopter can be charged from the remote and records a fly time of seven minutes, and it will require a charging period of ten minutes to be completely charged.

The remote functions on 6AA batteries. These are not included with the purchase and are to be bought separately. The FUCK sign is made of soft foam. The Flying Fuck copter will cost around $ 29.99. It is promoted as a method to actually give a ‘flying fuck’. So, what does giving or not giving ‘a flying fuck’ mean?

There are two ways of using the term, in two different senses. One way is when a person states “I don’t give a flying fuck”, meaning that they do not really care. In the same sense, the phrase ‘zero fucks given’ is also used. It can be used as an equivalent for ‘not giving a flying fuck’. The first recorded use of the ‘flying fuck’ is in the novel From Here to Eternity by James Jones, published in the year 1951, and based on Hawaii in 1941.

The books of James Jones were known for the strong language he used in them, and his portrayal of homosexuality. The book also has a movie version. In the book, a soldier, Slade, reads “The Re-enlistment Blues”, his poem. Following this, he states: “I don’t give a flyin’ fuck about what anybody says.” He means this in the sense that he cares very less or in the least about what others say.

Another way in using this term is when a person tells another person to ‘go take a flying fuck’. This is to be understood as the person saying this telling the other person to get lost in an intensive manner. The terms ‘fuck off’, and also ‘go to hell’ are also used in the same sense. This term is also mentioned in the novel Slapstick by Kurt Vonnegut in 1976. In this novel, an altered form of this term occurs.

The Flying Fuck copter can be used in these senses too. The Flying Fuck copter is a creation of Shed Simove. He is also the author of the book ‘Ideas Man’, a bestseller. He tells us in his book, how many of the ideas he had were formed, and whether and how they succeeded or failed. He has his own currency, the ‘Ego’. He created the Shinder dating app, where he is the only male, and all single women are matched with him.

He wants education to be more about the exploration of things, experimentation and also failing. He says that failing will only ultimately lead you to success. He thinks that the obstacles to anything new are only in the mind. His education includes Experimental Psychology, and he has had a career with Disney World.

Most of his products are either funny or controversial. His book, ‘What Every Man Thinks About Apart From Sex’​, is a 200-page blank book, and was to be used as a novelty gift. It became popular among college students especially in Britain, who used it as a notebook. He has received the ‘Gift of the Year’ award two times. The creations that won him this award were the birthday candles which were spelled ‘You’re Old’ instead of ‘Happy Birthday’, and his ‘Sound Machine.’ He is considered to be a cross of Anthony Robbins and Woody Allen and has performed several Motivational Speeches.

He was inspired to create the Flying Fuck copter by the people who run the Firebox.com, a gift website, which sells a variety of gifts and it allows people to order customized gifts also. He came to know from them that their bestselling gift was remote-controlled helicopters. He wanted to create a similar product.

Suggestions for this came to him, and among them was a ‘flying penis’. However, this had already been done by Gary Kasparov. A ‘flying pig’ was also suggested, and this already existed, and anyway did not appeal to Shed Simove. He finally got the idea to create a flying word, and this word was to be ‘Fuck’, and he thus created the Flying Fuck copter. He has commented that he has been thrilled that now people can use his creation to actually give a flying fuck or not.

The product is promoted using the same lines, that “you can now literally give a flying fuck”. It is to be used by people to actually ‘give a fuck’. Its price was initially around $34.99, but currently, it is available at $29.99 on https://www.thisiswhyimbroke.com/.