Here is our newest article about the Aerones Window Cleaning Drone.

Drones are probably known best for their utility in content creation or use in defense by the military. Their usefulness, however, doesn’t end there as they can also be used to replace humans for the performance of certain mundane tasks. SIA Aerones, better known as Aerones, is a Latvian company founded in 2007 which offers drones that fulfill a large number of usage scenarios.

Their initial claim to fame in 2017 came when one of their unmanned aerial vehicles was used as a rescue vehicle. Their products attempt to improve safety, save money and time, all in one fell swoop. Their window-washing drone is one such invention. It attempts to mechanize window cleaning, especially for high-rise buildings. However, are these drones simply gimmicks that are designed to wow people and not be very functional or are they the next step forward in window-cleaning technology?

The Aerones Window Cleaning drones are up to 20 times faster than their human counterparts and are much safer. These drones are quadcopters, which are three meters wide. They come equipped with 12 rotors along with hoses and sponges for cleaning. They also have onboard cameras for the operator on the ground to monitor the cleaning process.

The operator on the ground receives a live HD feed recorded by the aforementioned cameras through a 5G connection. The drones can function autonomously or be controlled by an operator using a remote, it weighs 55 kilograms(121lbs) and is attached to an independent power source on the ground below via a cable through which it draws its power. It’s also fitted with a battery.

In case something happens to the cable, the drone can still fly and land safely without endangering anyone close by. This drone’s water tank is also down on the ground along with the battery. The drone is also capable of pressure washing a surface with demineralized water using its hoses. It can shoot water from 10 to 500 bars of pressure.

The current maximum altitude the drone can reach is 350m(1148ft.), however, this is expected to increase in the near future with improved design and development. The Aerones drones are also fitted with a proprietary stabilization system which allows the drone to cope with less than ideal weather conditions and be ready for use whenever needed.

The drone comes with a safety cable that tethers it to the top of the building it is cleaning. This is a safety measure put in place in case of a malfunction while the drone is in-flight. This prevents the building from being damaged if the drone malfunctions mid-flight.

This drone can lift up to 200 kilograms of payload and can make grid-like motions to pressure wash the building efficiently, it can also be programmed to clean in either a vertical or horizontal orientation. 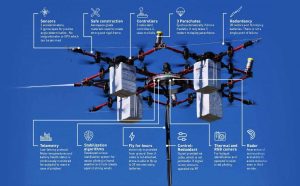 The Aerones drone has another version which is capable of cleaning and de-icing wind turbines. This version has 36 propellers and can lift up to 200 kilograms. These drones’ cleaning capabilities greatly aid in the general maintenance of turbines in wind farms; however, they also help increase power efficiency. The build-up of snow and ice on a turbine’s blade weighs it down and slow their rate of power production and can even stop it completely. Employing these drones for such maintenance can greatly boost the efficiency of the turbines and help save up on repair costs in the long run.

This also saves firefighters from taking risks to extinguish a fire by getting into difficult spots. Also, since the drone can be used remotely, it reduces the amount of manpower needed to tackle certain situations which would otherwise be very tricky. It also allows for more tactical strategies when dealing with large fires that are difficult to contain.

The Aerones drones are much more efficient than employing human cleaners as they clean much more efficiently. They also reduce the amount of risk involved as no humans need to be close to the windows. They have also demonstrated terrific versatility, showing promise as useful tools in firefighting and maintaining wind turbines. They help firefighters safely reach heights beyond their and the fire truck’s reach.

The drones also show great potential in search and rescue operations.  However, this product will not be available at the tech store just yet. Its industrial nature added with the novelty of this technology makes it difficult to produce. Hence, Aerones is only selling these drones to cleaning companies and fire authorities. Also, another obstacle in its way is the lack of 5G services and legislation over the world. For a product like this to be accessible to the common public, 5G needs to be commonplace. As it stands now, 5G is unreliable at best and utterly handicapped at worst.

The Aerones Window Cleaning Drones, however, are absolute beasts for people who can utilize the drones to their full potential. At $1000 per flight, it is cheaper than human-labor and also less risky.

Aerones aren’t the first to implement drones as window-cleaners, however, they have done it in the best and most sensible way. To answer the question asked at the beginning of this article, yes, these drones are the next step in the evolution of how windows are cleaned. The point of technology is to make a life for humans easier and these drones are certainly well on their way of doing that. Once they are available to the public, the Aerones Window Cleaning Drones will be everywhere replacing the large cradles that are used currently by window-cleaners.

If you want, you can watch this Youtube video for more information.