Most Aussie kids love playing and swimming in the water and what better way to get them outside to burn off some energy than by playing some games in the pool. Options for pool games are endless, however, if you’re stuck and need some inspiration, here are our favorite pool games that are sure to be a hit.

This one has been around forever and many of us would have childhood memories playing this classic. If not, let us familiarize you with the rules. The person who is “it” has their eyes closed and yells out “marco”. The other players have to respond by saying “polo”. The “it” player, still with their eyes closed, has to find one of the other players and tag them. Once they have tagged someone, the person who was tagged becomes the “it” player for the next round. 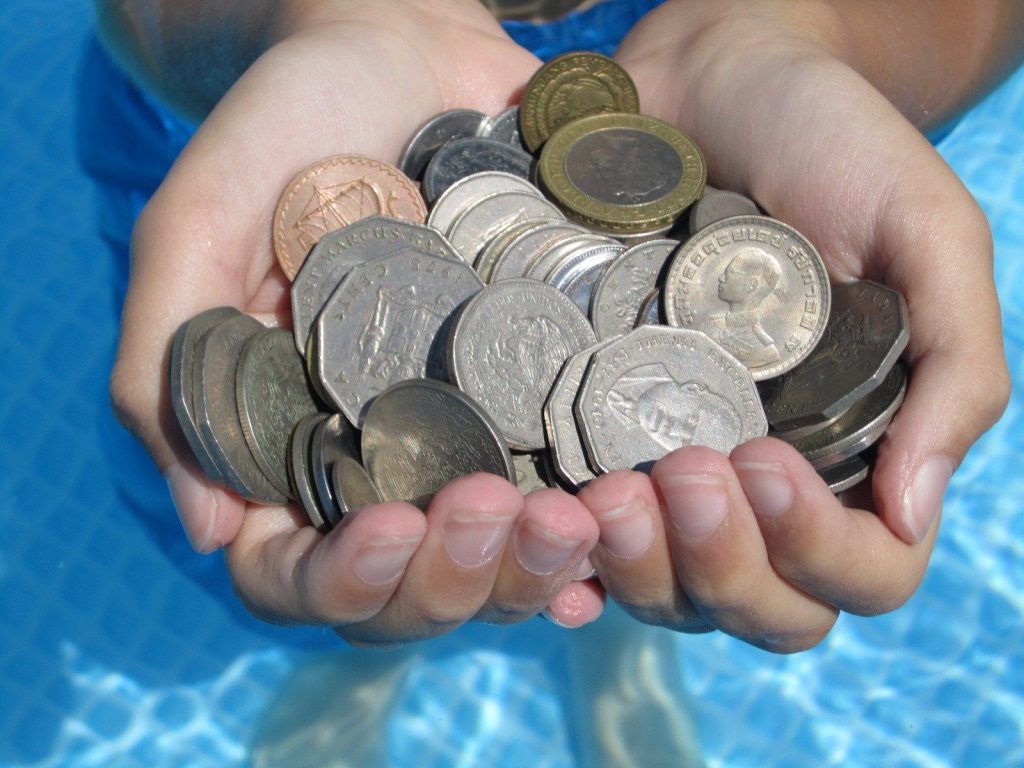 The players need to form two even groups for this game. You will need items in pairs to play. For example, two pool noodles, two diving sticks, etc. You then throw the items throughout the pool. The objective is for each team is to collect one of each of the items. Whoever collects all of them first, wins.

3. Fishy in the middle 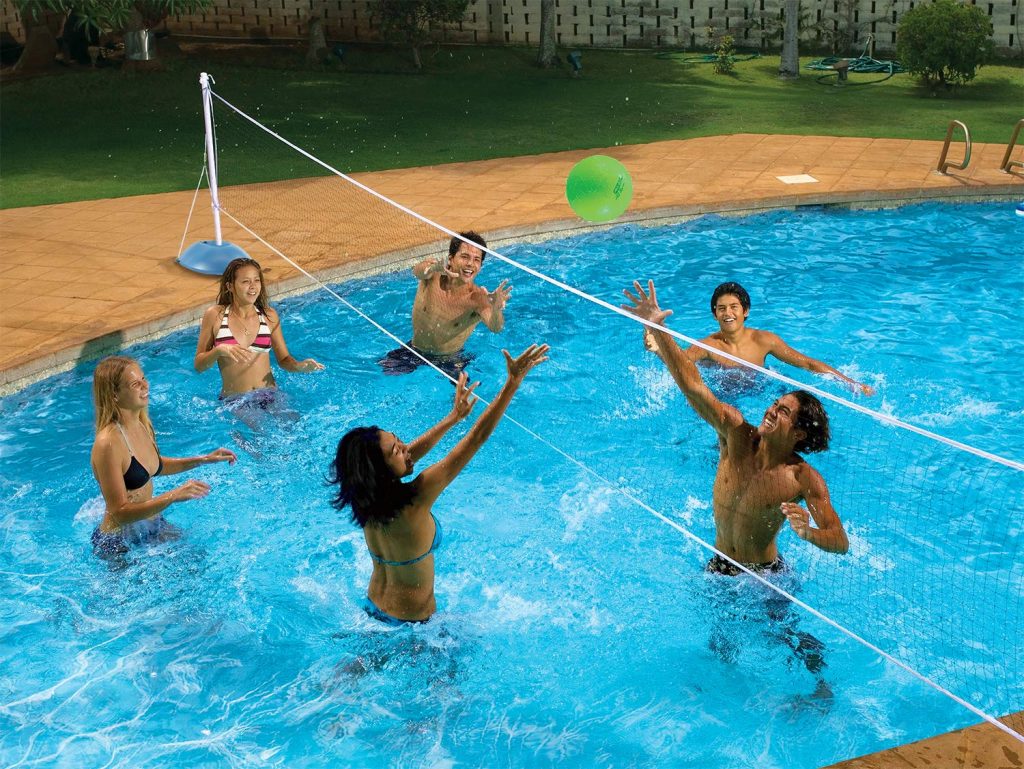 Volleyball is a favorite in the pool and is enjoyed by people of all ages. You will need a net and ball for this game. They are relatively inexpensive for a basic set and provide hours of fun.

Races can either be swimming from one end to the other and whoever gets there first, wins. Or you can amp up the fun even more so by racing on floaties or pool noodles- guaranteed laughs.

One person is Mr Fox and stands at one end of the pool. The other players stand at the other end of the pool and yell out “what’s the time, Mr Fox?”. Mr Fox picks a time and the other players must take that many steps forward. For example, 6 o’clock is 6 steps. At any point in the game Mr Fox can say “lunchtime”. Everyone has to swim back to the starting point as quick as they can before Mr Fox tags them. Whoever gets tagged is the new Mr Fox.

Identify who will be the “shark”. Everyone else is a “minnow”. The shark stands in the middle of the pool and says “fishy, fishy come out and play”. The minnows have to try to get to the other side of the pool where it is “safe” before the shark tags them. The minnow who has been tagged becomes the shark. 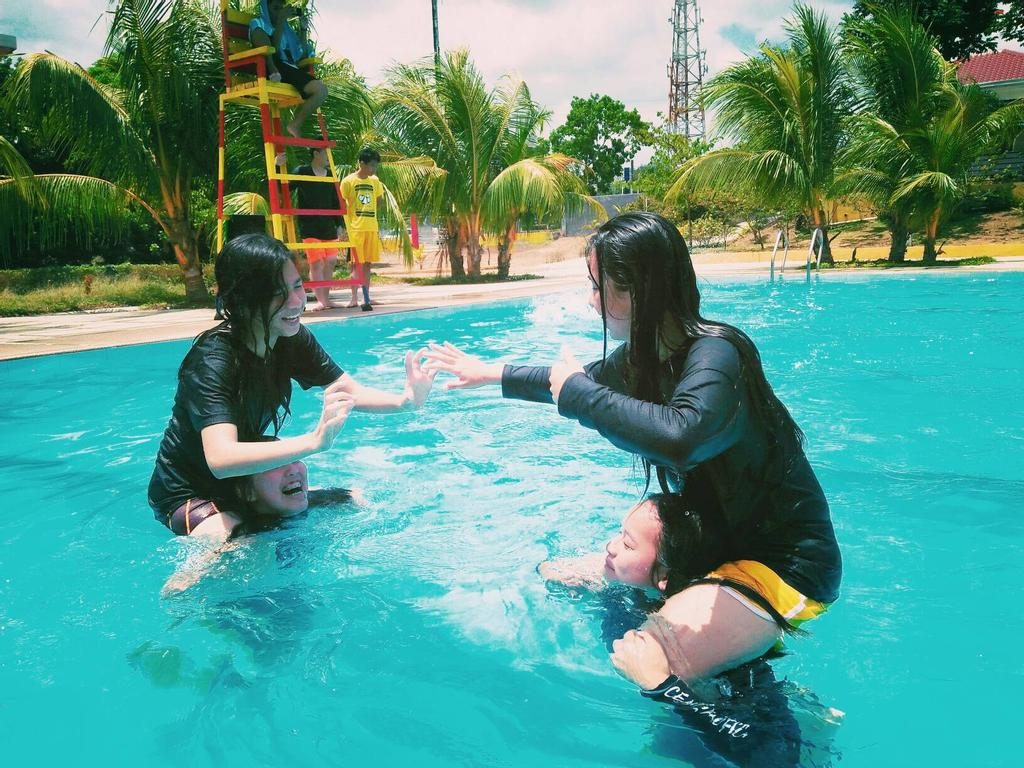 Shoulder wars are one that the parents can get involved in. This game usually consists of two parents or teenagers and two children. The child sits on the adults/teenager’s shoulders. The objective of the game is to knock down the other team. The child is the “attacker” and the adult/teenager is the vehicle. Only the attacker can use their hands to knock down the opponent. Whichever team falls into the water first, loses.

You’ll need some plastic buckets and ping pong balls for this game. Split the kids into sets of two teams. Give each team a bucket and have them line up on the side of the pool. Write different numbers with permanent marker on your ping pong balls. Throw them throughout the pool. When told to go, both teams jump in the pool and try to collect the balls to put in their bucket. Each player is only allowed one ball at a time. Once all the balls have been retrieved, the numbers on the balls will be added up. The team with the highest score wins. 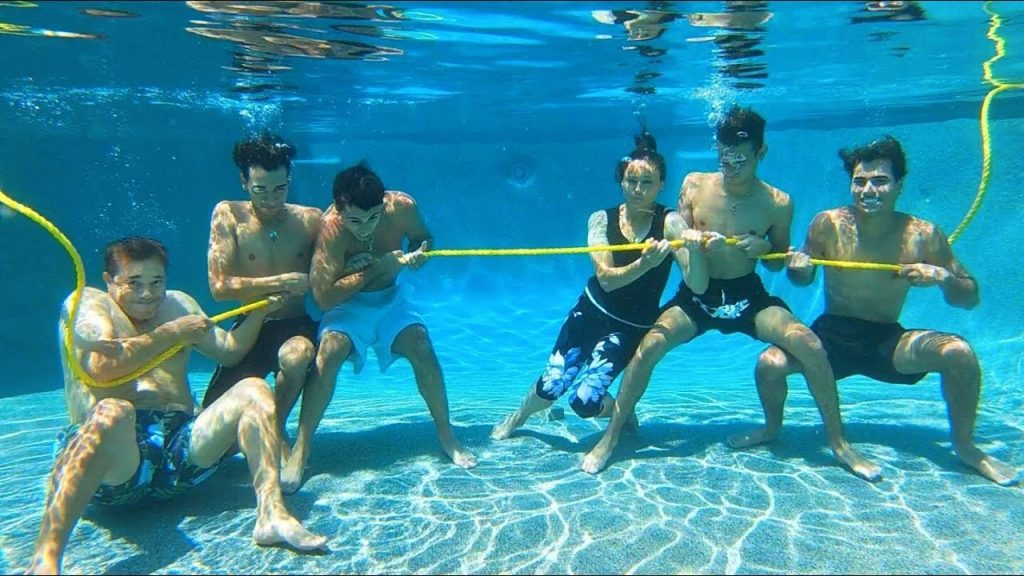 Tug of war is an old school game and its just as fun played in the pool as it is in the backyard. You’ll need some rope for this one. The teams should consist of 6 players each. Line each group up on opposite sides of the pool. Give each team the same amount of rope. The team that gets pulled into the water first loses the game.

This one may seem simple, but it’s a lot trickier than you may think. You need some empty water bottles. Take the lids off and the labels. Fill with water and distribute throughout the pool. The one who finds the most bottles is the winner. 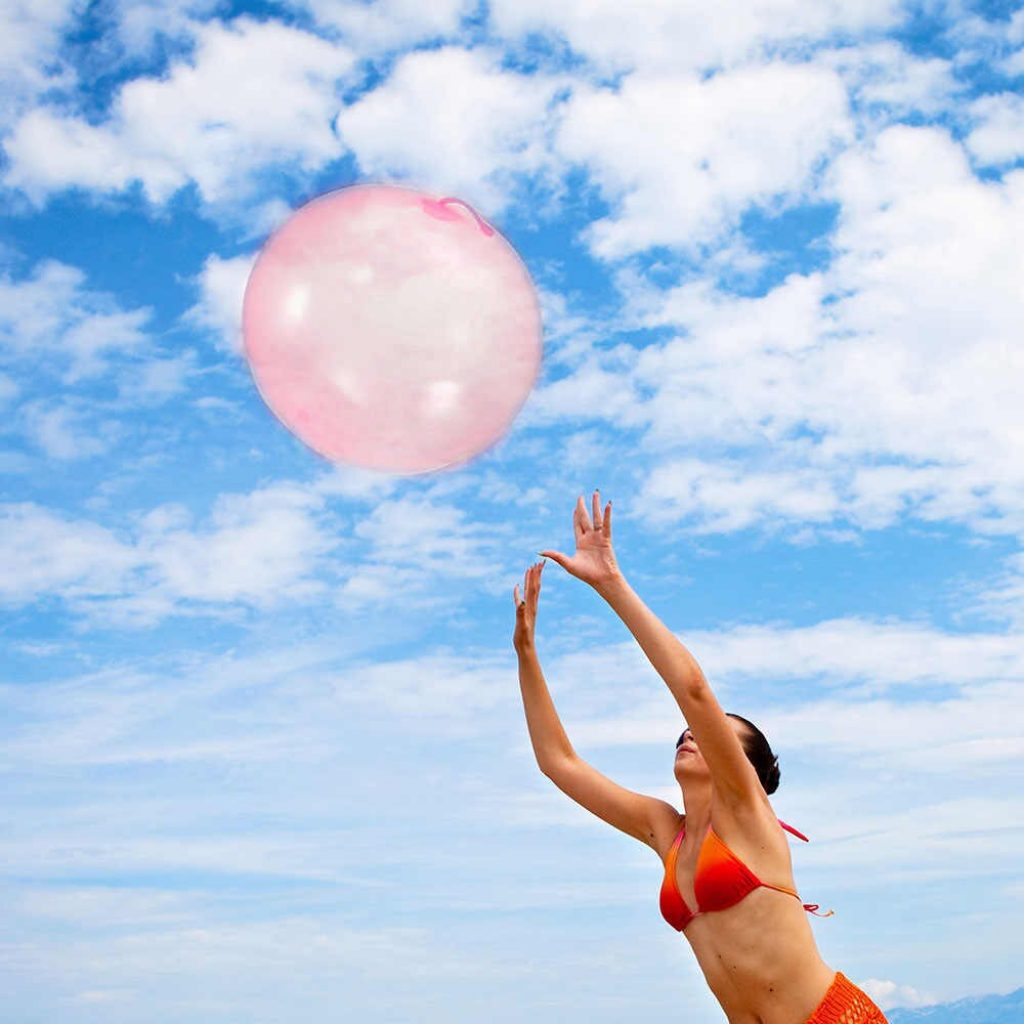 Air ball involves a beach ball and at least two people, the objective of the game is to bounce the ball in the air without it touching the water. Whoever lets the ball touch the water, loses. Make it

Get everyone in the pool to stand close together in a line along the edge of the pool. Get them to walk around the perimeter of the pool for a few minutes, then get them to jog for a couple of laps then run. This creates a current that the kids can get carried around the pool in. 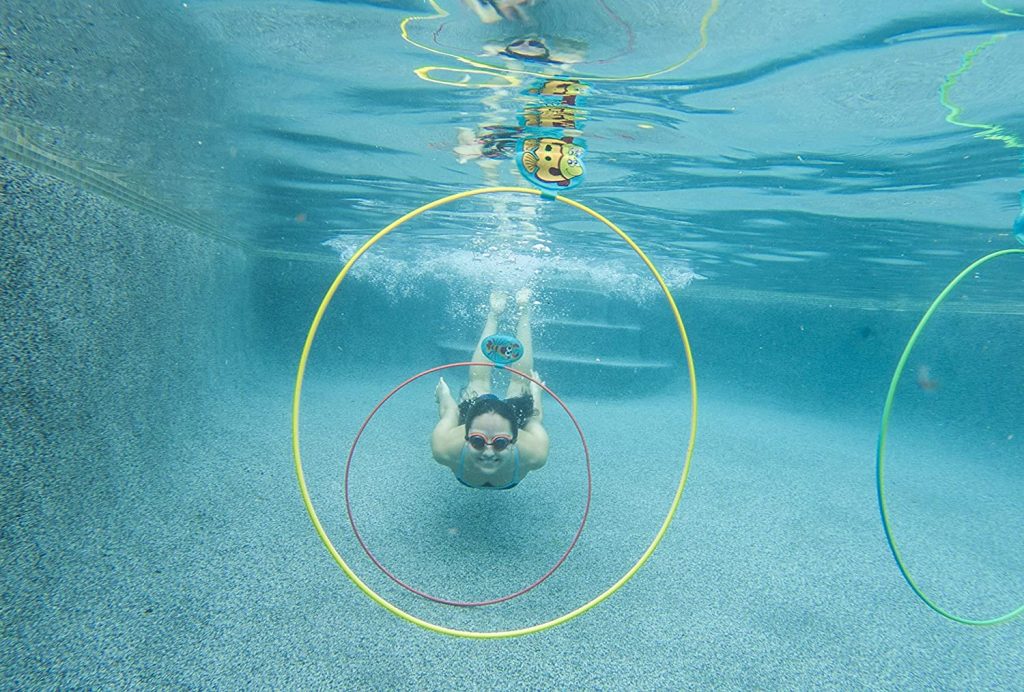 You can use underwater pool hoops for this or make some of your own using hula hoops, simply pierce holes along the edge of the hoop and fill with water. You can use cutoffs of pool noodles and attach them to the hoops to make varying depths. The players can take turns swimming through the obstacle course, whoever has the fastest time wins.

Dolphin races can be played in groups of two or in teams. It involves using a floating object such as a beach ball, rubber duck or a ping pong ball. Each player or team gets their own floating object and they must push it from one side of the pool to the other, using only their nose, no hands are allowed. If a player uses their hands, they have to go back to the starting line. The first one to get their floating object to the other end of the pool with their nose wins.

Pool games are a great way to entertain the kids and bring the whole family together for some fun! We hope you enjoy playing some of the games mentioned in our list. Ensure that children are always supervised in the pool and that adequate sunscreen is applied. Nothing will ruin their fun day in the pool more than an accident or sunburn. If you have any questions regarding the suitability of one of the award-winning pools for your family, give our friendly team here at Barrier Reef Pools a call today, we are happy to help.

Baby Care Basics – What to Do

Hipp Formula – What’s a Difference Between All the Variations

3 Tips And Tricks To Help Your Kid Fall Asleep Faster