The Eachine EV200D is the follow-up to the solid yet somewhat underwhelming EV100. The EV200D is a low-profile FPV goggle that is packed when it comes to features.

The EV200D is made entirely out of plastic. The shell is of decent quality and feels similar to what was used on the previous iteration, EV100. Though it is passable, the material does not feel as nice or as premium as most other FPV goggles. The head strap is also quite comfortable. The battery holder is well made and has slots for cable management which will be appreciated by users who love a clean set of cables. There is also a top strap that can be fitted onto the goggles to distribute the weight more evenly.

The face foam isn’t noteworthy but manages to fulfil its primary function. The buttons have a nice feel, however, the joysticks aren’t well-done and are a little abrasive around the edge. All in all, the build quality is very similar to the previous generation of Eachine’s goggles.

The goggles are equipped with a 720p screen which has now become the standard in FPV goggles. The screen is quite sharp with a good amount of contrast and a balanced colour profile. The colours look rich and not washed out and the screen is decently bright. The field of view of these goggles is 42°, which is decent as anything higher than 45° makes it difficult to view the whole screen at once. However, there is a slight edge distortion on either side of the screen which can be noticed. The aspect ratio of the screen is 16:9, however, one can switch between the 4:3 and 16:9 aspect ratios to match their camera.

The IPDs provide a respectable range of 56-72mm. They are even compatible with FatShark diopters. The insertion and removal of the diopters is slightly problematic, however, and if they aren’t fully inserted, it becomes difficult to access the narrower positions of the IPDs. What sets the EV200D apart from the other IPDs is that the diopters aren’t stationary as they slide with the screen when they are adjusted.

Eachine’s DVR is another one of its features that set it apart from the other FPV goggles on the market. Unlike most other goggles which use the same DVR software and codec to record the video, Eachine’s EV200D uses the H.264 codec, which provides a high-quality, better and more realistic DVR recording for future playback. It’s high quality also makes editing such footage much easier than other DVR footage.

The On-Screen Display or OSD on the EV200D displays the channel that is being used and the battery percentage remaining which are useful when the goggles are in use. These OSDs, however, aren’t standard on all goggles giving Eachine an edge over some of its competitors. The goggles also have a USB port for installing firmware updates. 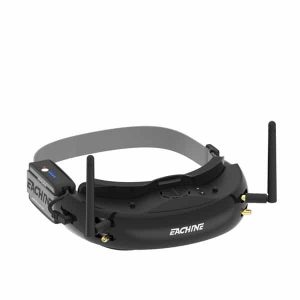 The EV200D comes with a 1800mAh battery which is fitted at the back of the goggles. The battery on its own does not last very long, retaining its charge for only a couple of hours at a time. However, this is where one of it’s most underrated features comes into play. The USB port on the goggles can also be used to power the goggles using a portable power bank. This is very helpful as it makes the goggles very reliable as even a mobile power bank can be used to charge the goggles, thereby extending the battery life by hours.

The decision to put the battery at the back of the goggles also helps balance out the weight helping the goggles in not feeling very front-heavy.

The FatShark HD3 like the Attitude V4 has a native aspect ratio of 4:3 however, like the EV200D it sports a 42° field of view. The HD3 is a more premium goggle than the EV200D. It’s the base price is $100 more than the EV200D and after buying the module and battery which are sold separately it is around $150 more expensive than the EV200D while offering basically the same feature set. The HD3’s display also isn’t as rich as the EV200D’s display.

The first FPV goggles to sport an OLED display, FatShark’s HDO has excellent contrast, and due to the technology employed in OLED screens, it also has deep blacks and rich, punchy colours. Although it only has a 720p display, the images look sharp and crisp. There is almost no edge distortion as OLEDs have excellent viewing angles. However, when compared to the screen of the EV200D, the results are shocking. The EV200D gives the HDOs are run for their money. Though the HDO comes out on top the EV200D’s LCoS display holds it’s own very well against the HDOs at the 4:3 aspect ratio.

The Eachine EV200D FPV goggles are not perfect and come with their own set of problems. However, in this case, the pros outweigh the cons by a long shot. The EV200D punches above its weight when it comes to the features offered. They borrow several features from their premium counterparts while keeping the cost of the goggles relatively budget-friendly.

The goggles are usually priced at $325-370, however, the price may fluctuate depending on the seller. There simply isn’t another option on the market that provides better value for money than the EV200D and these goggles are really a worthy rival for the top dog FatShark.

Best Vacuum Cleaner For Stairs In 2021

The Smart Way to Safely Clean Your Toner Cartridge – 2021 Guide