Chicago Bulls are a professional basketball team residing in Chicago, Illinois. One of the most popular teams throughout the world and probably the most deserving of NBA popularization, globally, during the 1990s. If you know anything about basketball at all, you are familiar with the Bulls. The giant of Central division is long past his glory days but still manages to keep their fans all across the globe based on their everlasting brand.

Red, black and white is easily recognizable as Bulls’ colors since the club is one the few ones in the NBA that have not rebranded themselves drastically through the years. Arguably the greatest player of all time, Michael Jordan, is one of the reasons that the 6 time NBA champions, Bulls, are to this day considered an elite organization in the league.

That being the case, everyone from age 7 to 77 had wanted to put on a Bulls’ jersey once in their lifetime. Jordan’s jersey is to this day the best-selling jersey of all times, beating the likes of Kobe Bryant, LeBron James, Magic Johnson and many more.

Wearing a jersey as a fashion statement became really popular during the ’90s and ’00s. The influence of the NBA was at an all-time high and it began affecting the fashion of ordinary people. It was especially popular in Hip-Hop culture during those times. Everyone was seen wearing a jersey of their favorite player and representing their city.

Considering we’ve mentioned earlier that the Bulls’ aesthetic hasn’t changed a lot during their existence, in collaboration with the team from lines.com, we’ve decided to help you notice the subtle differences that the Bulls have made to their jerseys since 1966, in order for you to easily pick your next basketball memorabilia. 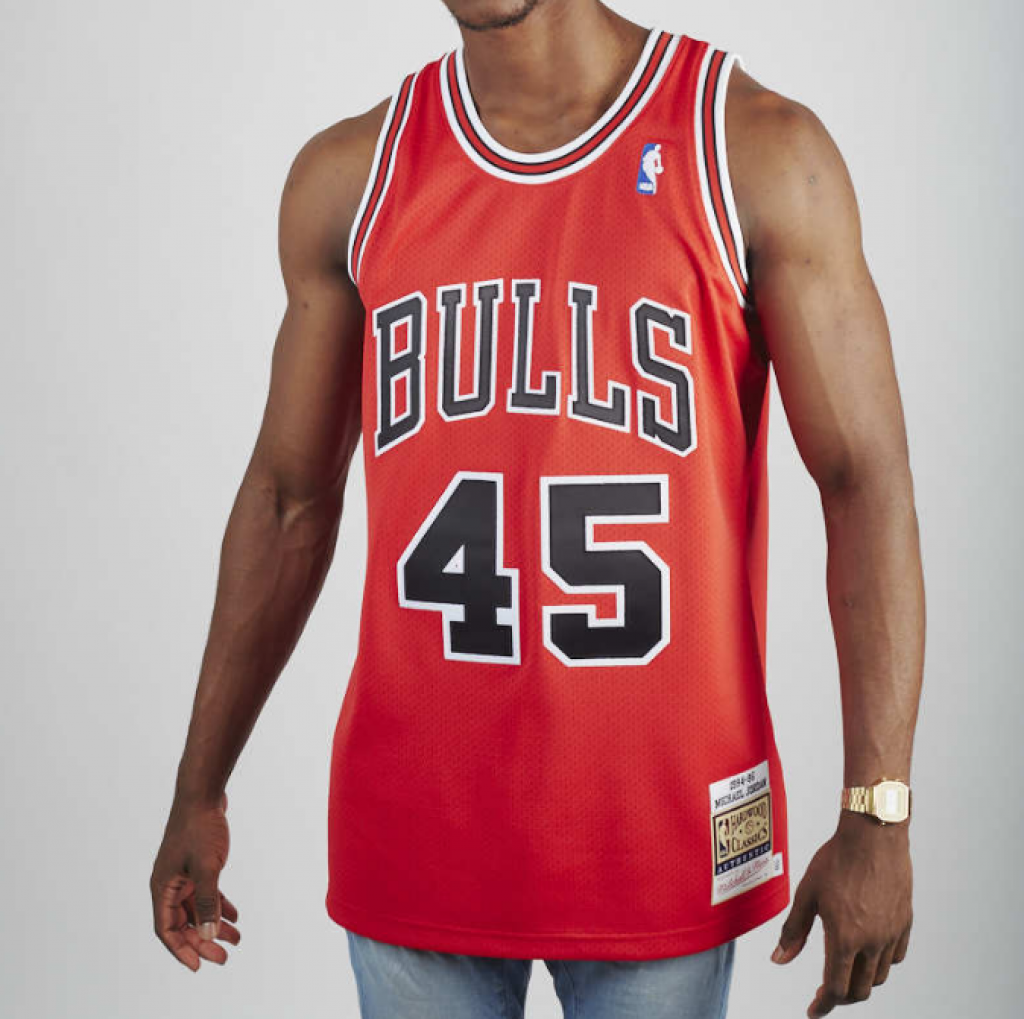 Easily the most recognizable jersey in the history of the team. There is just something so powerful, yet elegant, about those uniforms. This legendary, at the time away uniform, has been the definition of Chicago for ages. The main color is red with thin white/red/white stripes along the edges of shirt and shorts, with Bulls’ logo on both sides of shorts. On the front of the shirt, you will find a large player number and ‘Bulls’ inscription, both colored black with white outlines. The back of the jersey is essentially the same, the only difference being the players’ last name is written above the number. Make that number 23 and last name Jordan and you have yourself the most iconic jersey in NBA history. 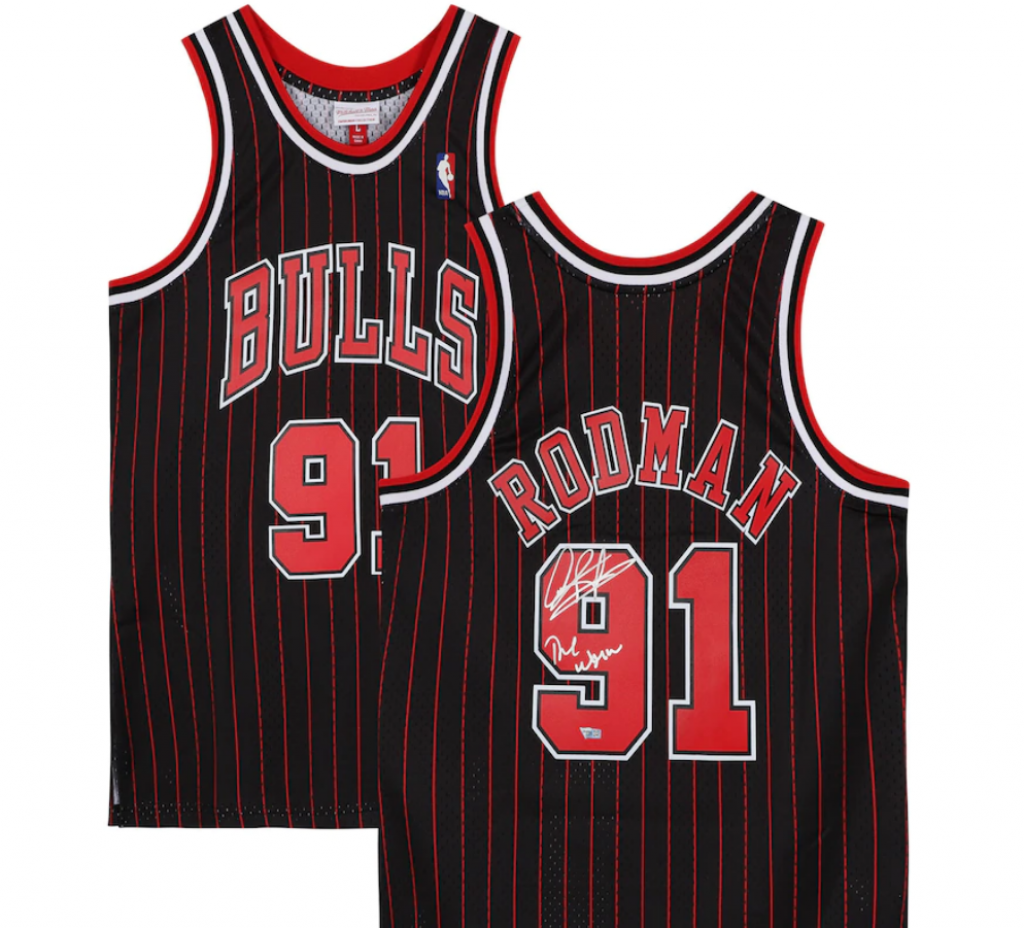 Also known as the 90’s pinstripes, this jersey was introduced during the second 3 peat of the legendary Chicago Bulls team led by Jordan. It is certainly the most famous alternate jersey in teams, admittedly, not so diverse jersey history. It holds a special place in every Bulls fan’s heart, because, who doesn’t like remembering winning? It’s a classic look to say the least. It was a black jersey with thin red stripes, giving it a classy look one might say. It also featured the team’s logo on both legs, large lettering in red color with white/black outline, the collar was Bulls’ tricolor stripe and it had a gold-esqe NBA logo on both shirt and shorts. To this day one of the more popular Bulls’ looks that had been mimicked on all sorts of sports merchandise, some of which you can find some at Onephyle. 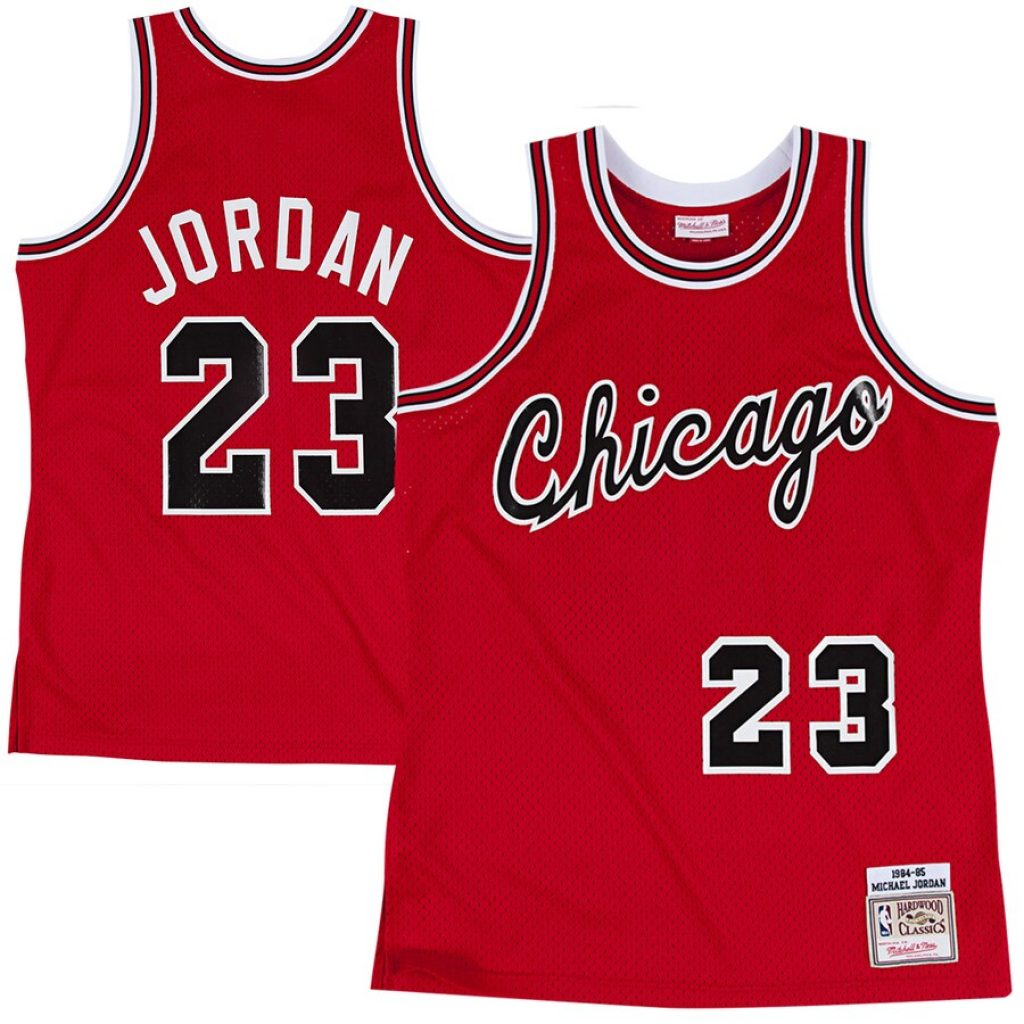 This alternate might just be one the cleanest, most elegant jersey design in NBA history. Introduced in the late ’70s and it perfectly captured the vibe of those years. It was a simple red jersey, with very tiny shorts mind you, but then again, it was 1979. ‘Chicago’ written in cursive adorned the front of the jersey, and the subtle, slightly off to the left, medium-sized number made it a beautiful composition of both power and elegance. Pair that with knee-high socks like they did in the ’70s and you got yourself a trendy look even nowadays. 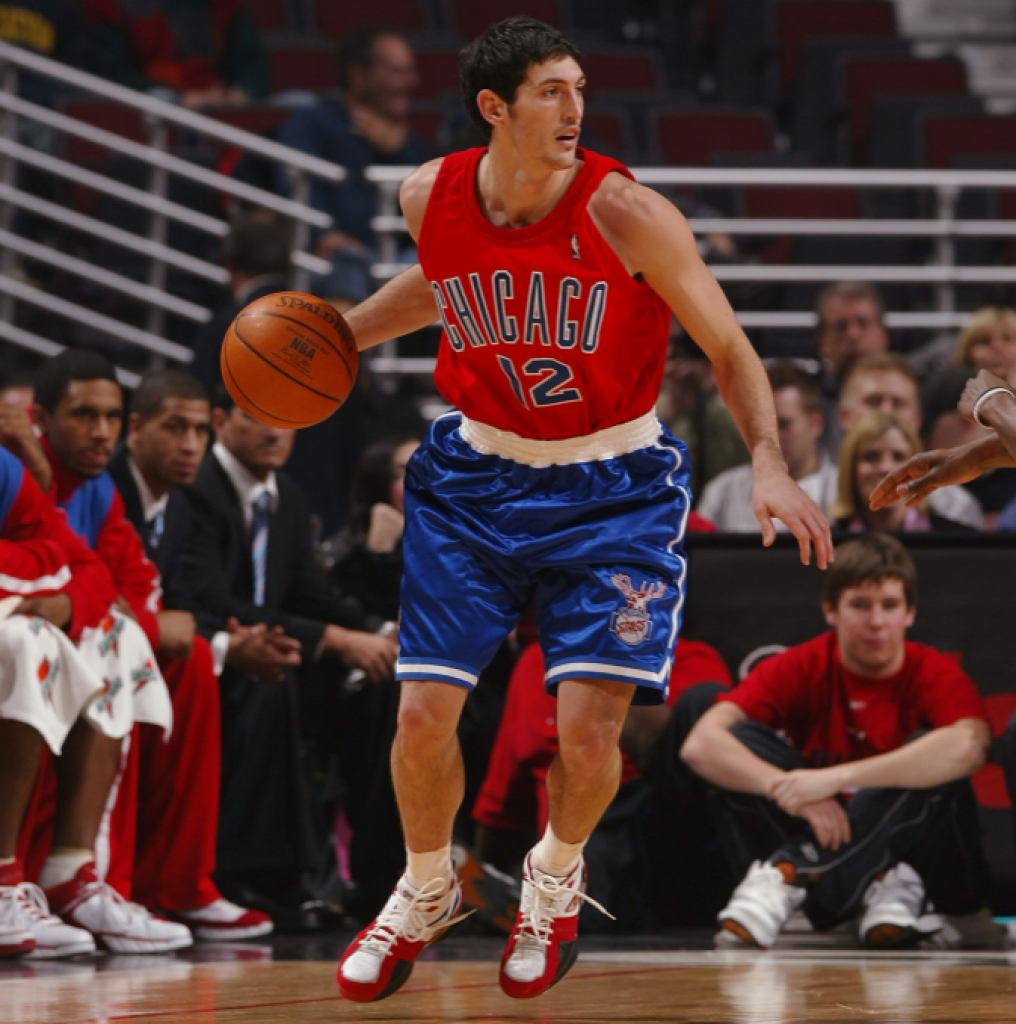 Not the best-looking combo of shirt and shorts we have ever seen on a basketball court, but it was an homage to the Chicago Stags, the previous Chicago basketball team. It was a red and blue combination, an edgy look one might say. The shirt itself was not necessarily bad, it just didn’t work with the shorts. But still, fun addition to you jersey collection, not many people have it. 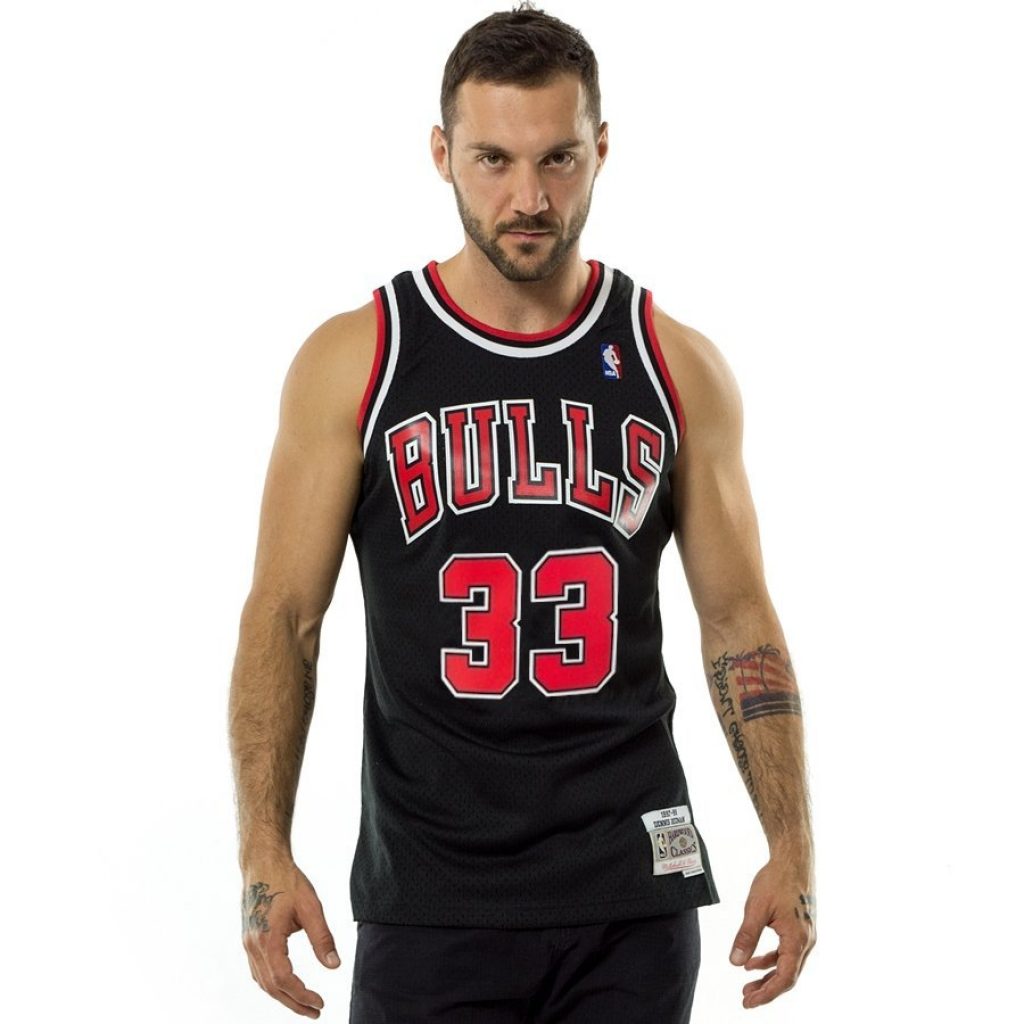 This was a solid substitute for a pinstripe jersey. It is a simple, black jersey, but this time, without the stripes. Simple red lettering, with a classic white outline to differentiate it a bit from a black background, ‘Chicago’ inscribed in classic Windy City font. The rest of the jersey is pretty much the standard Chicago uniform, O shaped collar, tricolor outline and so on. 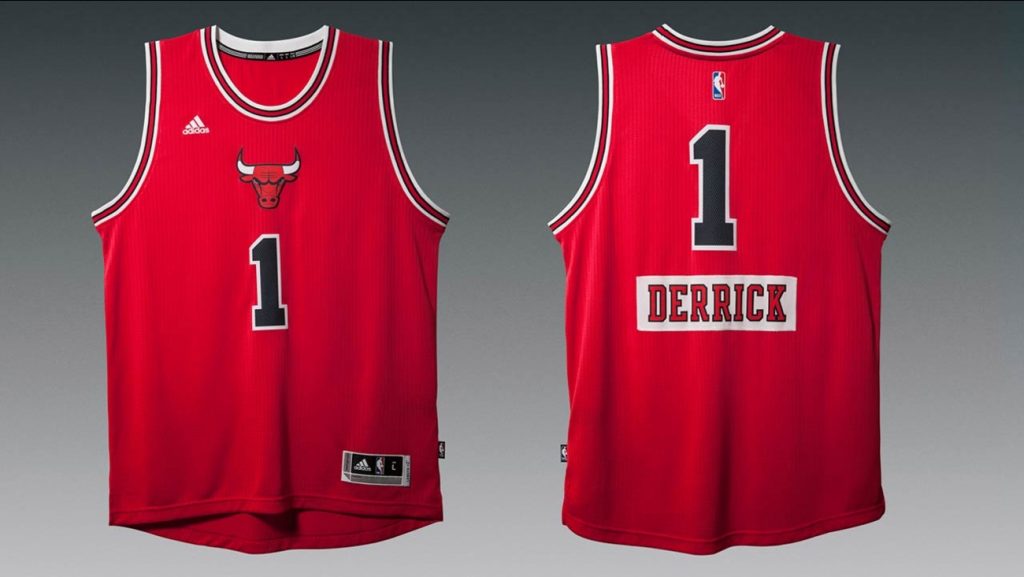 Having a unique jersey for a Christmas game has become a trend in the NBA since mid-2010’s. The first one for Bulls came in 2014. Not that different from a regular Bulls uniform color-wise, since the colors already match the Christmas theme, but there were some other striking differences. The back of the jersey was sporting a player’s first name, sewn in on a white backplate. Not as popular, but a very memorable look nonetheless. 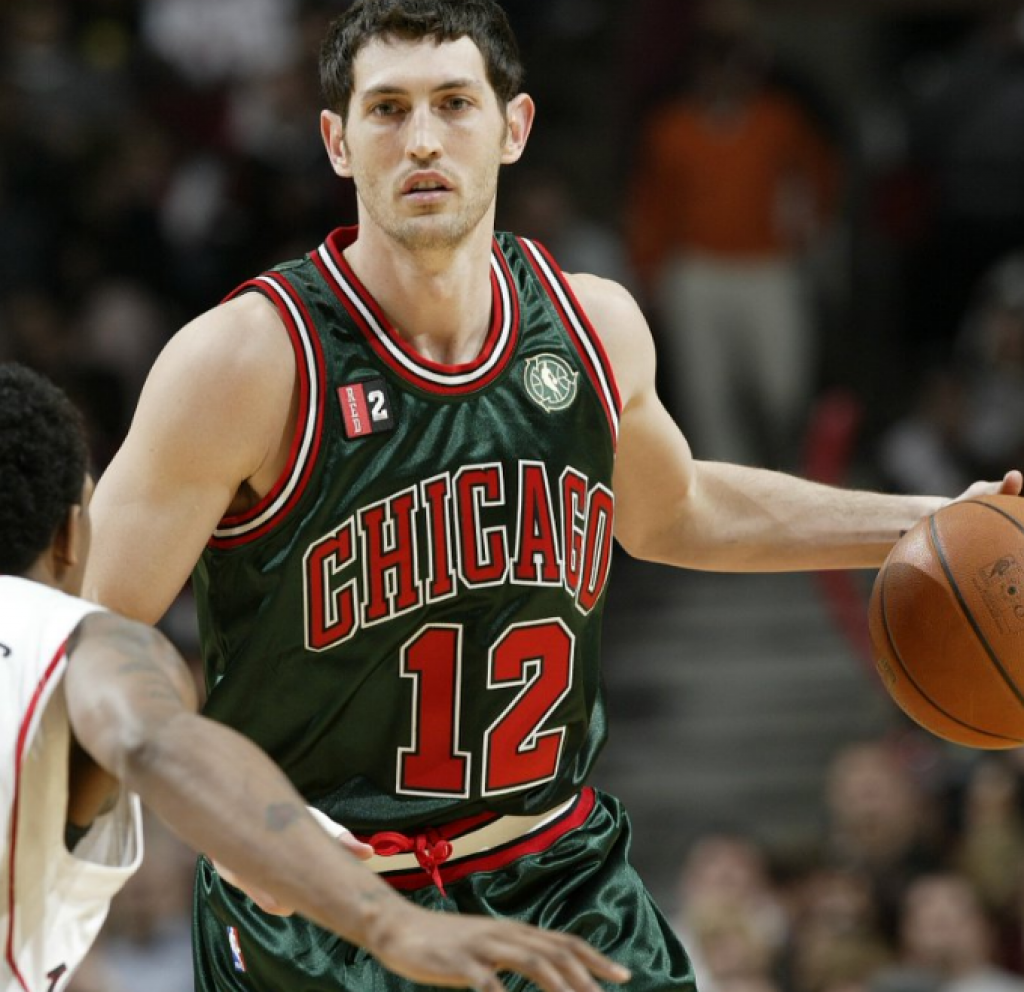 These jerseys were worn by Bulls in 2009 as part of the NBA’s Go Green initiative. Kind of Sacramento green colored uniform with red accents was very reminiscent of Milwaukee Bucks threads. This uniform was the biggest departure from the usual team style up to that point. 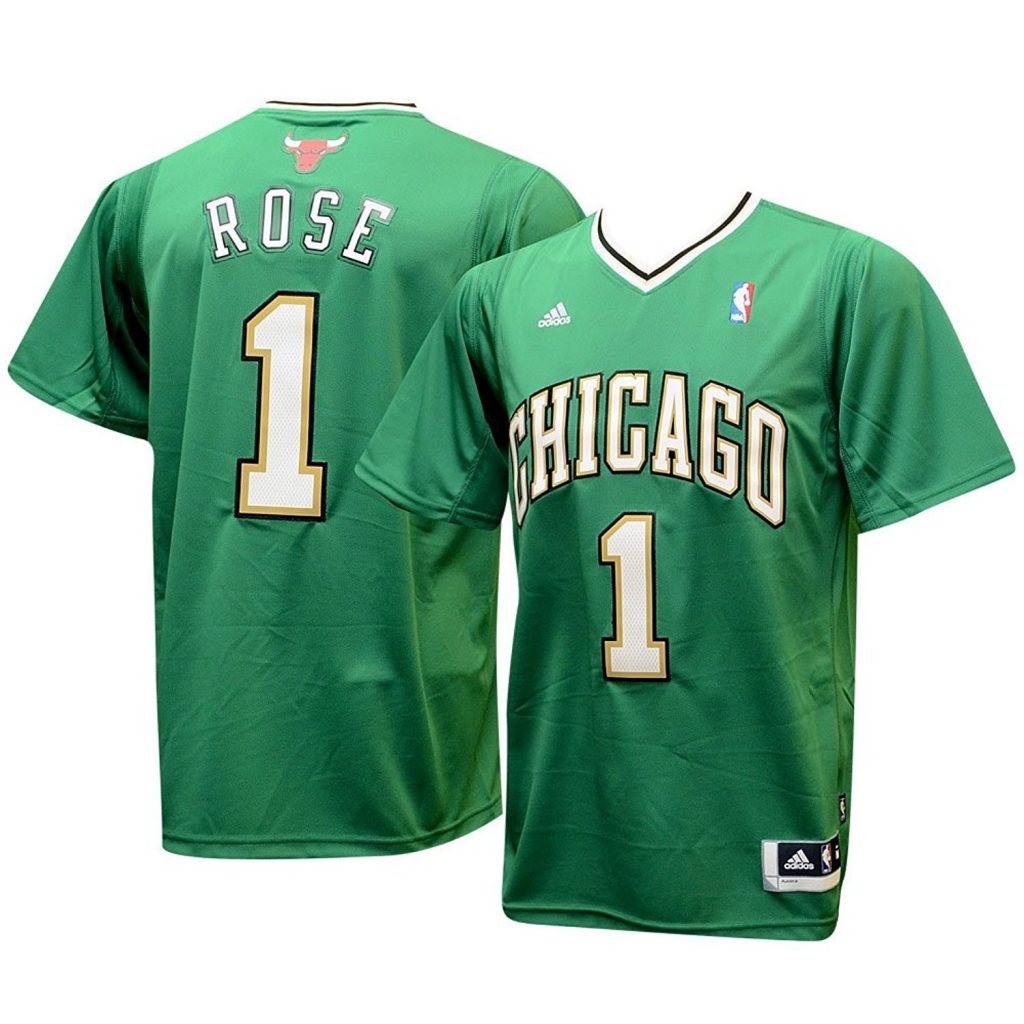 2014 was the year of trying out new styles for the Bulls. The eye-catching short sleeve, Irish-green uniform was and still is popular with the fans. 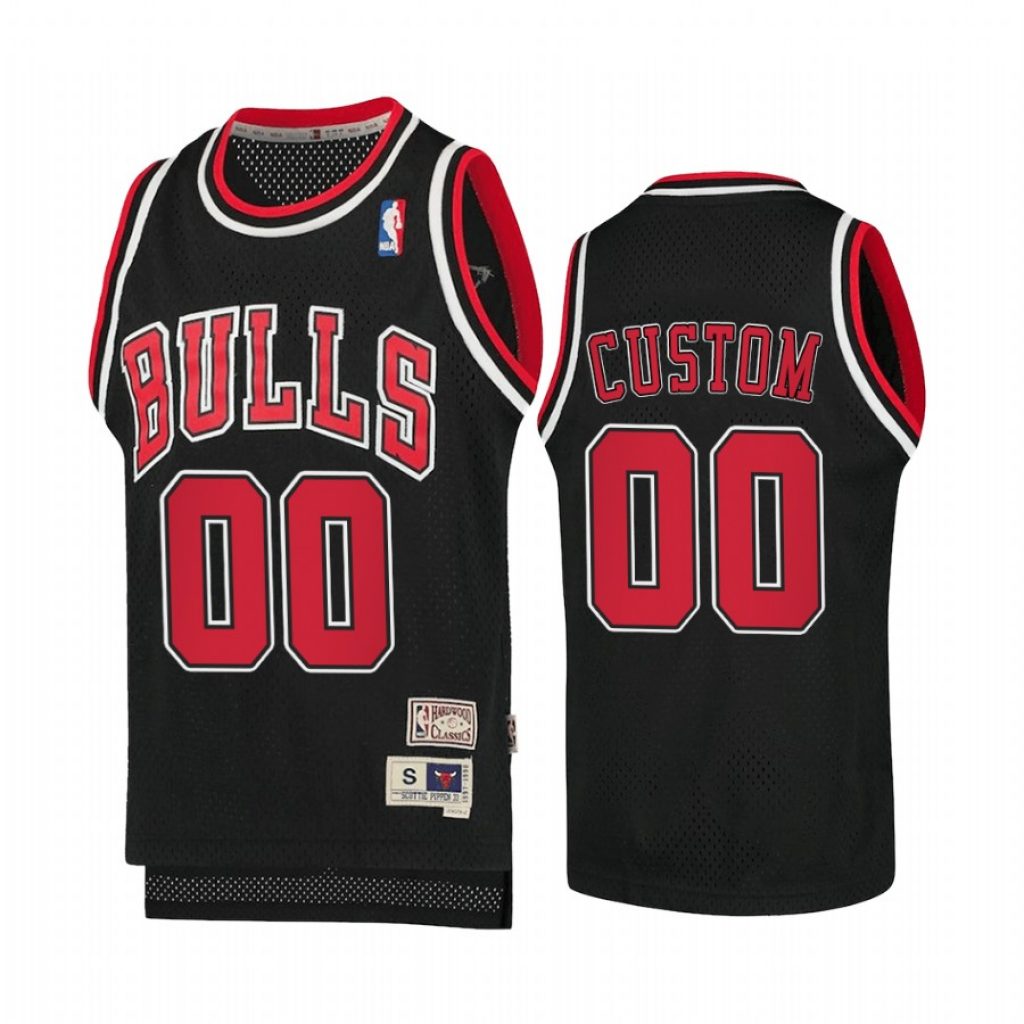 Another remake of the iconic Bulls black uniforms, only this time, it followed the NBA trend at a time, so it came in a short sleeve format. Essentially the same as the 2.0 version, just with sleeves. 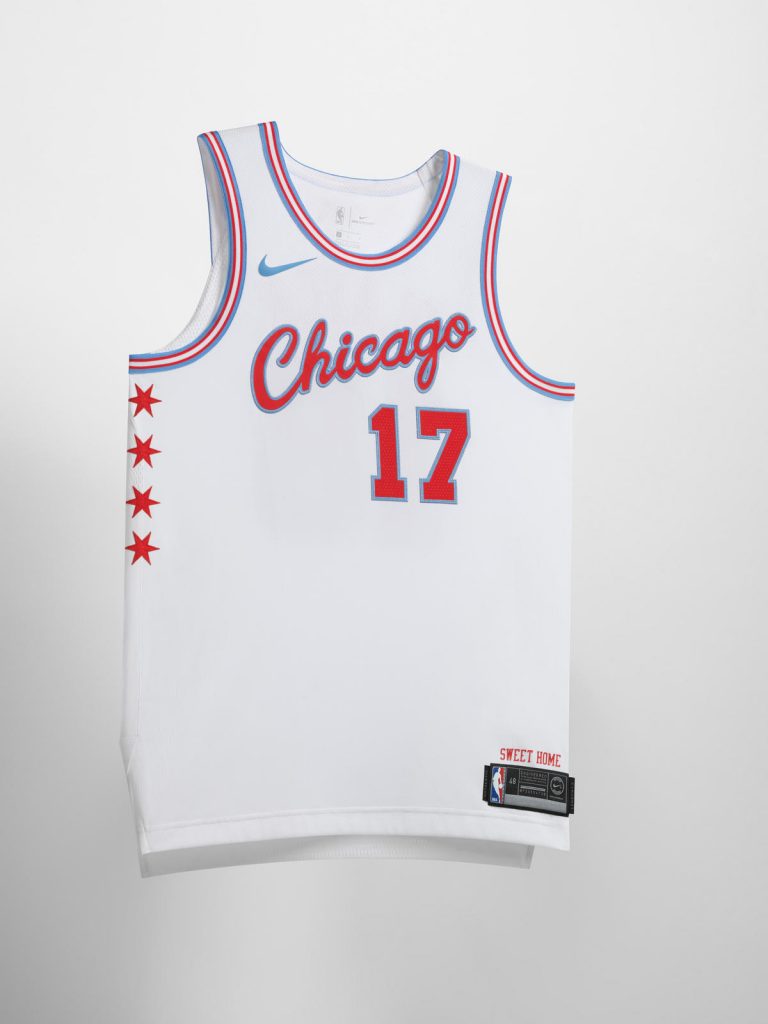 These were introduced when Nike began producing the uniforms for the league. There are 3 different versions of the City edition uniforms, implementing the Chicago’s flag colors, blue and red. The first one, from 2017, was a white uniform with red and blue accents. 2018 version was black, with light blue parallel stripes encompassing four six-sided stars representing the four major historical events in the city’s history. Finally, the current version is a light blue uniform, with red and white accents and a simplified team logo right at the center of the chest.

Hopefully, this list of several different styles of Chicago Bulls uniforms made you more familiar with the team’s history and style evolution throughout the years and it could also serve you as a guide if you’re planning on broadening your jersey collection.