Vue.js and React.js are frameworks that are listed as some of the most popular and powerful tools for front-end development. Choosing between the two is not easy, so if you are considering either of these tools for your digital product, it is worth learning more about them sooner. Vue.js was created by developer Evan You in 2014. At first, the framework was only used in China, but it quickly gained popularity around the world. Of the biggest advantages, Vue.js primarily allows developers to easily migrate previous projects, and it is open-source. The framework is based on JavaScript and can be successfully used to create a User Interface (UI) and Single Page Application (SPA).

Vue.js offers separate capabilities for less complex projects (Options API) and more complex ones (Composition API), so it is quite easy to use. The framework comes with numerous libraries and tools, so its capabilities are very extensive. Other advantages of Vue.js are the lightness of its files, speed of operation, and, above all – functionality.

The downsides of Vue.js include a rather poor ecosystem and a lack of support from a major corporation (such as Facebook or Google). React was created by Jordan Walke – a former Facebook employee who released React in 2013. What’s interesting is that React is not exactly a framework, but a component-based JavaScript library with which you can create interactive web elements and user interfaces. In MVC or Model-view-controller, it is responsible for the view layer (V).

Among the biggest advantages of React.js is the ability to simplify and shorten code by directly supplementing the code with HTML elements. React also enables significant performance improvements and error reduction due to its unidirectional data flow. Using React also comes with Facebook support and a great deal of developer time savings thanks to code simplification.

It is important to know that React is not completely free of drawbacks, one of which is the architecture, which can be difficult for novice developers because it is not subject to obvious rules. The syntax extension that is JSX can also be considered a disadvantage. This allows both HTML and JavaScript to coexist and makes learning React much more complicated.

Similarities between Vue.js and React

Vue and React are named next to each other as the best front-end tools for a reason. They have a lot in common, and their most similar features are: 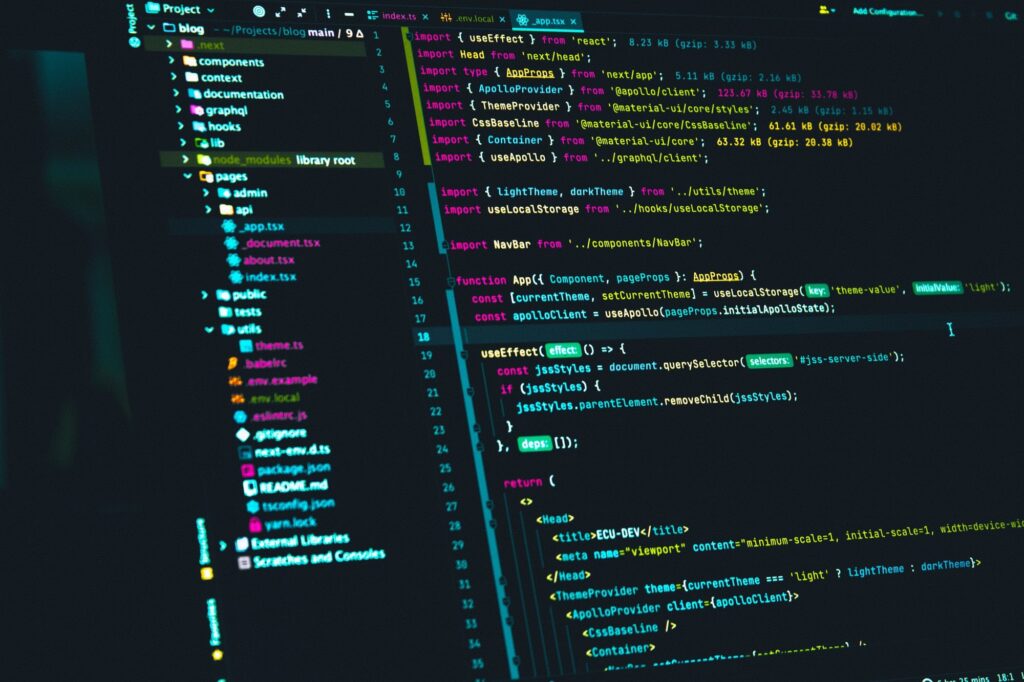 The two tools also differ significantly in their approach to application design. Where React focuses mainly on creating reusable components, Vue provides front-end tools enabling a much more complex approach. Since Vue’s template syntax uses less code and is simply HTML, its learning is much easier than with React.

It has to be said that React greatly simplifies debugging by modifying the state in one place and has a fast runtime, while Vue boasts fast startup and great memory allocation.

Which tool to choose?

When you want to deliver an MVP as quickly as possible, or if you require simple third-party integration, use Vue.js. It allows quick coding, is simple, and works well not only with single-page applications (SPAs) but also with existing multipage applications. Since Vue components can be written in JavaScript, but also HTML and CSS, it is a very good tool for prototyping, especially at the beginning of the road with programming.

React, on the other hand, will be ideal when the UI is focused on more user interaction. It’s also the tool you’re looking for if you’re worried about your site overloading and hanging. With Virtual Home, you will avoid this risk.

It is impossible to say that any of these tools is better. Any of them may be just better for your product, and that’s why you should consciously decide on the right framework for you based on an analysis of all the pros and cons. If you need help choosing between Vue.js and React.js, at Applover we can take a closer look at the requirements of your product and advise you on the right solution for it.