Should Your Next Deer Rifle Be an AR-15?

So, you brought your tacticool AR-15 to the deer hunt. And, now you’re getting scoffed at and laughed at by all the boomers present.

They’re telling you a boltie is the only way to go, and that you’ve wasted thousands of dollars getting that latest Trijicon ACOG, and your fancy laser/light module, and your super expensive Gemtech .300 Blackout suppressor.

Now, they’re telling you they all marched barefoot, virtually naked, up the Rockies for four days and nights, surviving on nothing but the snow and their own willpower, only to shoot a buck from 1.000 feet with their trusty bolt action in .308, then made the same trip back to fight on Gettysburg.

At that point, you’re starting to feel bad and start making excuses like “this crappy thing is the only thing I had on hand” or “I got some ammo cheap, so why not spend it?”. But, should you be, really?

Absolutely not! Grandpa can have his blunderbus, but, stand back, old man, the future is now, and its name is AR-15! 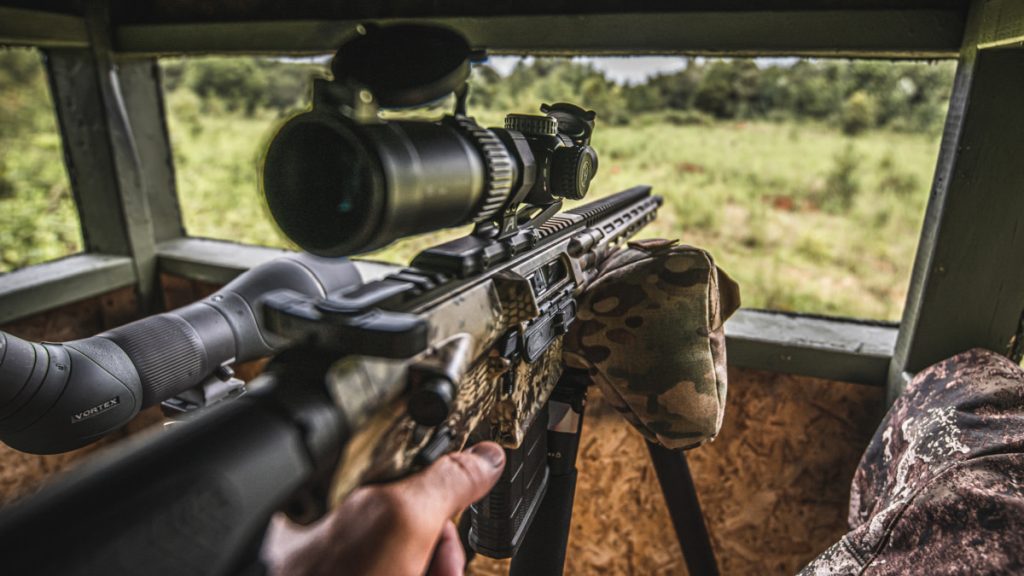 Many people would deny the AR-15s’ place as a hunting rifle, but these people are simply wrong. With the abundance of AR-15 style rifles available on the market and their famed flexibility, it is no wonder people have found ways to make the AR-15 into a sporting rifle.

In fact, there’s even a name for this. It’s called a Modern Sporting Rifle (MSR), and such rifles have already been in use for a decade now.

On the other hand, many people would argue that the .223 caliber is not a good hunting caliber, and that its accuracy and power leaves much to be desired when it comes to medium game.

However, what most people forget is that .223 was selected as a basis for 5.56 due to its outstanding accuracy potential and ballistic coefficient.

In the US, .223 has become so popular due to these characteristics that it completely overshadowed any other .22 caliber as a primary caliber for varmint hunting.

So, should your next deer hunting rifle be an AR-15? Definitely. And here’s why.

Most people associate AR-15 ammo with .223/5.56. However, that’s just not true – the true potential of AR-15/10 pattern rifles lies in their incredible modularity, allowing them to swap calibers at a moment’s notice. For additional information, check this out.

This, as many of you AR owners know, is done through changing uppers. Under federal US law, the actual firearm, and the actual registered part, is the lower receiver of any rifle. This means that your upper receiver can be whatever you want it to be, so long as the lower stays the same.

And, due to the modularity of the AR platform, you can install pretty much any upper on any lower without a problem. This means that your AR rifle can be in whichever caliber you want, so long as you’ve made the necessary modifications to the upper.

In addition, you can have any kind of setup for your upper, and just swap it on your one and only lower, and your rifle has now gone from a plinking rifle, to a match rifle, to a home defense rifle, etc.

In essence, with the law being what it currently is, this means that your only registered part can be used in any situation, at any time. So, why not add hunting on top of that?

With that said, the AR platform has incredible flexibility and adaptability attributed to it. With such a vast number of calibers available for your rifle, you can pick any cartridge you need based on the size of your game, and even have multiple uppers ready for different prey. 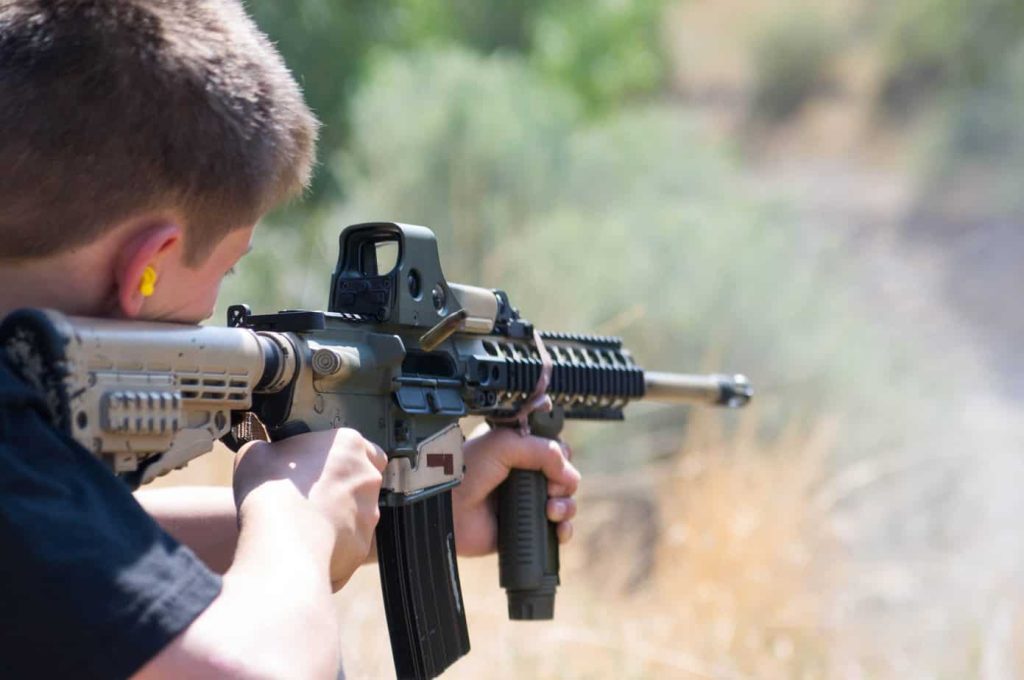 One of the frequent comments on why bolt action rifles are better for hunting is their accuracy.

Indeed, bolt action rifles, thanks to their fixed barrels and lack of automatic moving parts, have a much better accuracy potential than a semi-auto AR-15. That’s the reason that even now, the US Army employs the Remington Model 700, a bolt action rifle, as their standard sniper system.

However, this argument is becoming increasingly obsolete. Rifle technology has advanced significantly, and many ARs now can shoot sub MoA groups with ease, while also retaining their semi-auto capability.

Furthermore, that semi-auto capability can be of incredible use during the hunt, especially when hunting boar and varmints. Small, fast-moving targets are much easier to re-engage with a semi-auto rifle, and you can keep plugging away until you hit your target, whereas with a bolt-action rifle you often only get one shot.

This ability to make quick follow-up shots can truly be a difference between dropped game and meat on your table, especially in parts of the country like Alaska, where survival is more tenuous and closer to a frontier-type setting.

Ultimately, semi-auto precision rifles aren’t a ridiculous notion anymore. And, with the right build and right ammunition, your AR can shoot as well as an M700 any day of the week.

There is something to be said about the maneuverability of the AR-15 rifle. Made of aluminum, polymer, and carbon fiber, the AR-15 style rifle is incredibly light and with shorter-barreled builds, it can be incredibly nimble when obstacles are presented.

And there are plenty of obstacles in the woods. Trees, foliage, and roots can all be a hindrance, and you’ll have to move your rifle around them plenty on the hunt, so having a light rifle might be quite a boon on a long hunt.

In addition, camping in trees is a very popular hunting technique. Up in the tree, there will be plenty of branches that you’ll have to work around to get a good shot. Not only that, but you have to lug your rifle up that tree in the first place.

All of this is remediated greatly by the nimbleness of the AR platform. On top of that, a lighter rifle helps greatly with shooting small, fast targets like deer, antelopes, coyotes and boars, especially when coupled with red dot sights. Your ability to re-acquire and lead a target after a miss, or shoot another target in quick succession is entirely made possible by an AR-15. One of the great advantages of the AR-15 platform is the abundance of sighting systems you have available.

Most modern AR-15s uppers come with a Picatinny rail already installed as standard. As such, each and every AR-15 has the ability to mount any number of different optics, making the rifle easily adaptable for any kind of situation.

Do you need long-range scopes for long-range shooting? No problem. Low power for 100 yards and in shots? Also, no problem. And then there are a number of red dots available, making heads-up shooting a breeze.

In fact, some of the most popular sighting systems used for varmint hunting are red dots. This is because they allow quick target acquisition and quick follow-up shots, and a wide field of view so you can track a small, fast target.

When it comes to deer hunting, low-powered 1-4 prismatic optics are some of the most popular among AR-15 hunters. They allow plenty of magnification so you can place the perfect shot while also allowing for better target tracking and better visibility.

All in all, the close relationship the AR platform has with the Picatinny rail makes the system quite a potent tool for hunting. Older, classic rifles might not have the ability to mount different optics, so their sighting system selection is greatly limited.

All in all, saying that the AR-15 platform, the most ubiquitous and most popular rifle system in the US today, is not a suitable weapon for hunting is ludicrous.

Thanks to its modularity, the AR-15 has an incredible amount of flexibility and the ability to adapt to any situation. As we’ve described, a single AR-15 lower can be a versatile rifle, filling any number of roles its user needs.

On top of that, AR-15s are very accurate weapons. With proper modifications, materials, and manufacturing technology, an AR-15 can be as accurate as some of the most accurate sniper systems available to our armed forces, let alone our local resident hunters.

So, the next time somebody tells you you shouldn’t get an AR-15 for your hunting purposes, go ahead and hit that deer at 100 yards straight in the heart and let your rifle do the talking.