The Lenovo Ideacentre Y900 was a go-to choice for gamers who wanted to have a high-performance upgradeable PC. However, the Y900 wasn’t entirely friendly since it was overpriced and came in an unappealing design. Now, the new Lenovo Razer PC is looking to change all that.

The Lenovo Razer PC is VR-Ready with an aesthetic appeal that will catch the attention of gamers. Razer’s involvement in the development of this gaming powerhouse has, in all ways, made the Y900 an all-round performer. This is mostly because of the high-end hardware it packs within its arsenal. This new PC version has amazing lighting capabilities. It can glow in a range of millions of color options, a technology derived from the Razer Chroma lighting.

The gaming PC can also combine effectively with the high-performance keyboards and mice that come with the setup. Coupled with a high-end Intel Core i7 CPU and a powerful Nvidia GTX 1080 graphics card, the PC will chew up everything you through at it. You can play all your favorite games at 4K resolution. On top of that, you get unquestionable performance matching the price you pay for this powerhouse. 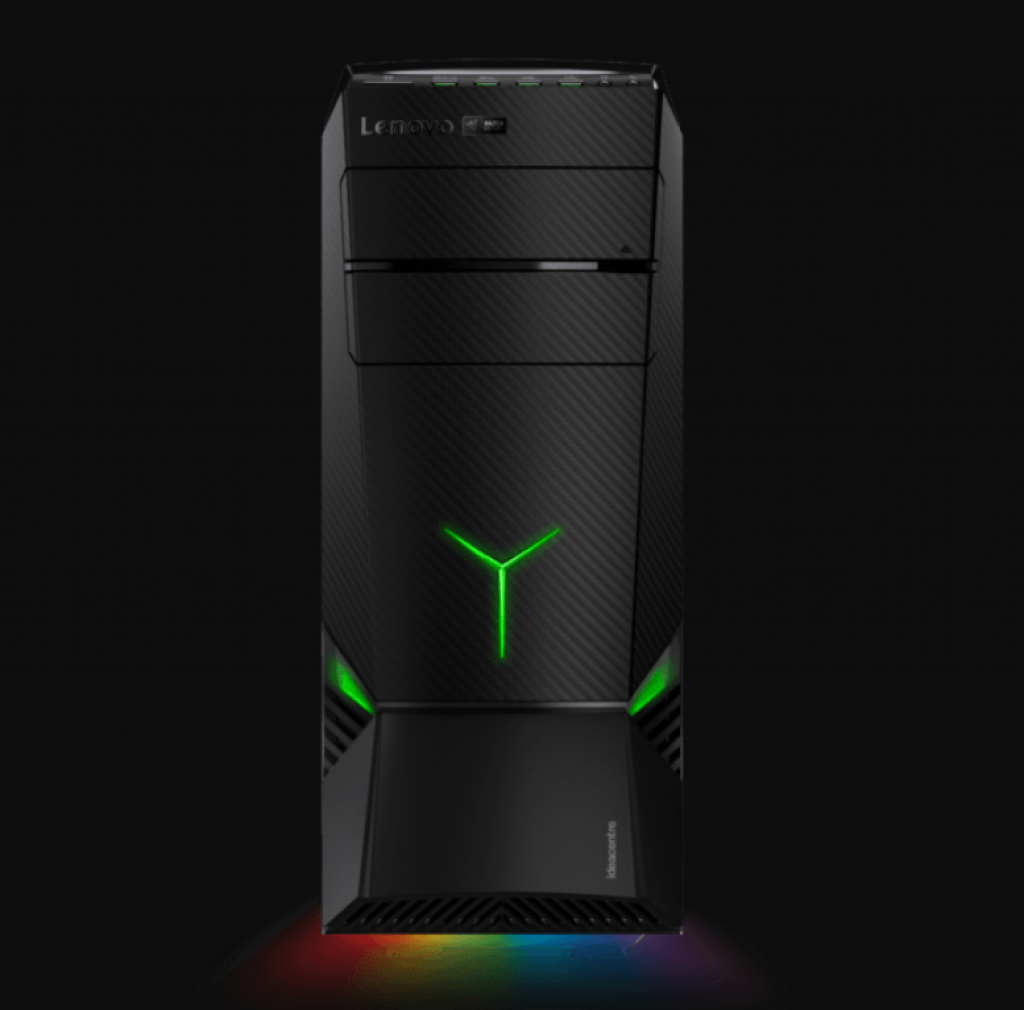 The Lenovo Razer PC ships in with an overclockable Intel Core i7-6700K chip. The processor operates at a speed of 4.0 GHz of the base frequency, running up to 4.2 GHz on turbo boost. It has 8 MB of Intel Smart Cache guaranteed to perform all multitasking tasks with remarkable ease. The new Lenovo Y900 Razer edition processor draws a power of 91W from the supply.

This PC features an Nvidia GeForce GTX 1080 Founders Edition GPU with 8 GB of graphic memory. This graphics card is capable of maxing out settings of most of the modern AAA titles with high frame rates at 1080p resolution. This PC also has 16 GB of RAM for multitasking and faster execution of tasks.

In terms of storage, the Y900 Razer edition PC has dual storage technology. It comes with a 256GB SSD coupled with a large-capacity 2TB hard drive running at 7200 RPM. The Lenovo Y900 Razer PC weighs in at 33 pounds with dimensions set at 19.8 x 18.9 x 8.1 inches. The gaming PC features Chroma lighting from Razer. The extra accessories from the box include the high-end Razer Mamba mouse and the BlackWidow Chroma. 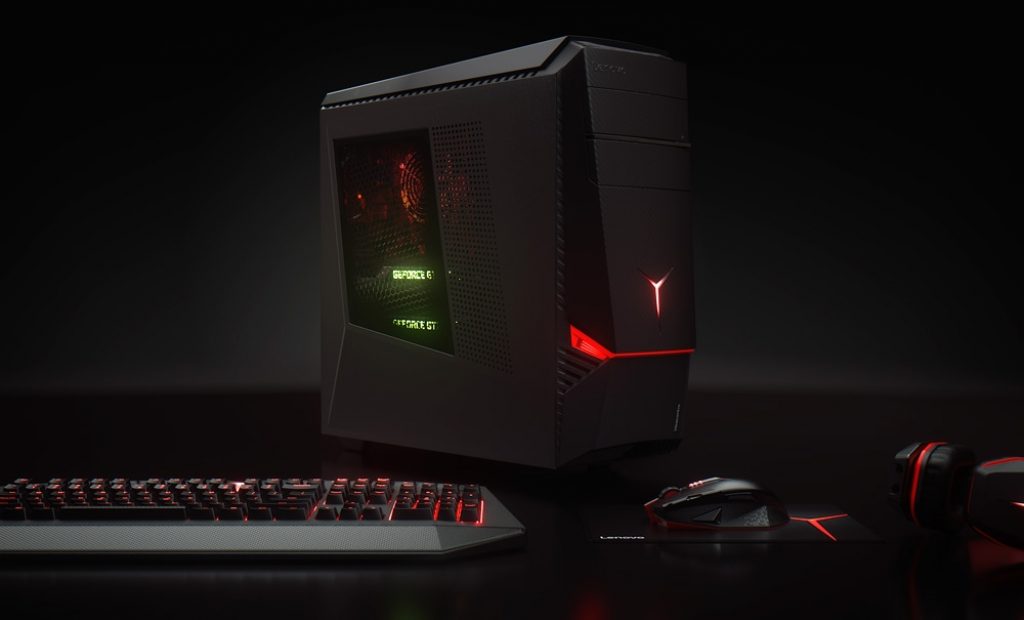 Lenovo and Razer are well known for manufacturing premium gaming laptops. Visit here to see the Amazing Laptops for gaming. With the development of this new PC, the build quality is the same as with the Y900 line. The only difference this time is that the gaming PC now has some Razer aspects added to it. It features the trademark black chassis with sharp angles.

However, the red accents on the USB ports now have a green accent instead. The previous red LED lighting is gone. Now we have a rainbow array of colors explicitly from the Chroma software by Razer. This PC goes against the norm that we see with most gaming PCs. This approach is what has made this powerhouse maintain its stability in the markets until now.

The preinstalled synapse program provides you with a wide array of lighting options to choose from, typical of the Razer products. The Lenovo Razer PC allows you to customize the lighting at the desktop front showing any single color you’d like. It also has settings for dictating the lighting pattern as well.

The extra peripherals such as the mouse and keyboard, also feature this capability. It is a remarkable feat to have all your PC equipment synchronizing in color sequence all at once. This PC is not the lightest in the market. It weighs in at 33 pounds but is well optimized for carrying since it has handles at the top end. 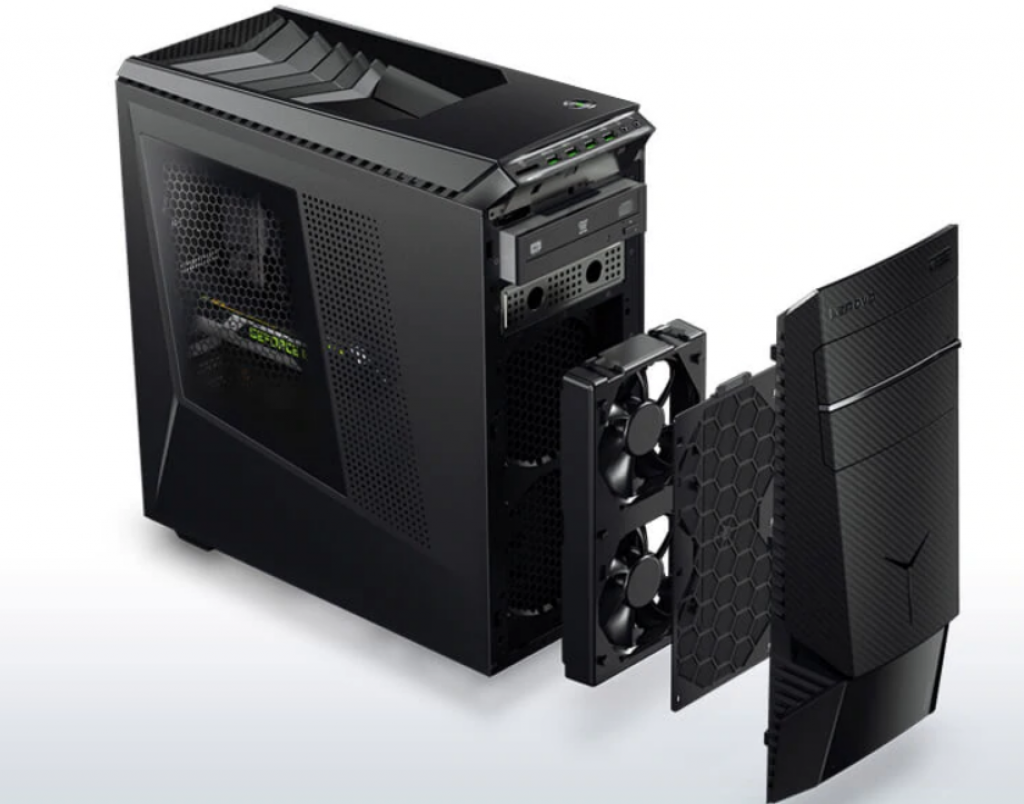 The Lenovo Y900 Razer Edition maintains the same port configurations as with the last model. At the front face, it has a set of four ports featuring the USB 3.0 technology. There is also a card reader next to the headphone and microphone jacks at the Lenovo Razer PC front. The back end has a USB 3.0 port pair next to the two pairs of USB 2.0 ports. The Lenovo Razer PC doesn’t feature the USB-C desktop technology yet. There is also provision for a PS/2 port useful of much older accessories, an RJ45 Ethernet jack, with a full set of surround-sound port configurations. There is also an additional section from the Nvidia GeForce GTX 1080 graphics card slot. It has a triple DisplayPort configuration coupled with one HDMI port for connecting to external displays. Upgrading this PC is very easy now.

With a screwdriver, you can easily detach the side panel after pressing a button. This will help you gain access to the GPU, storage bay, and RAM that is replaceable if you so desire. The GPU can be detached without using any tools since it is held in place by plugs and plates that are removable.

Compared to the work involved with the Dell XPS Tower and the Alienware Aurora, this is a walk in the park. Most of the significant components are replaceable without having to use tools. 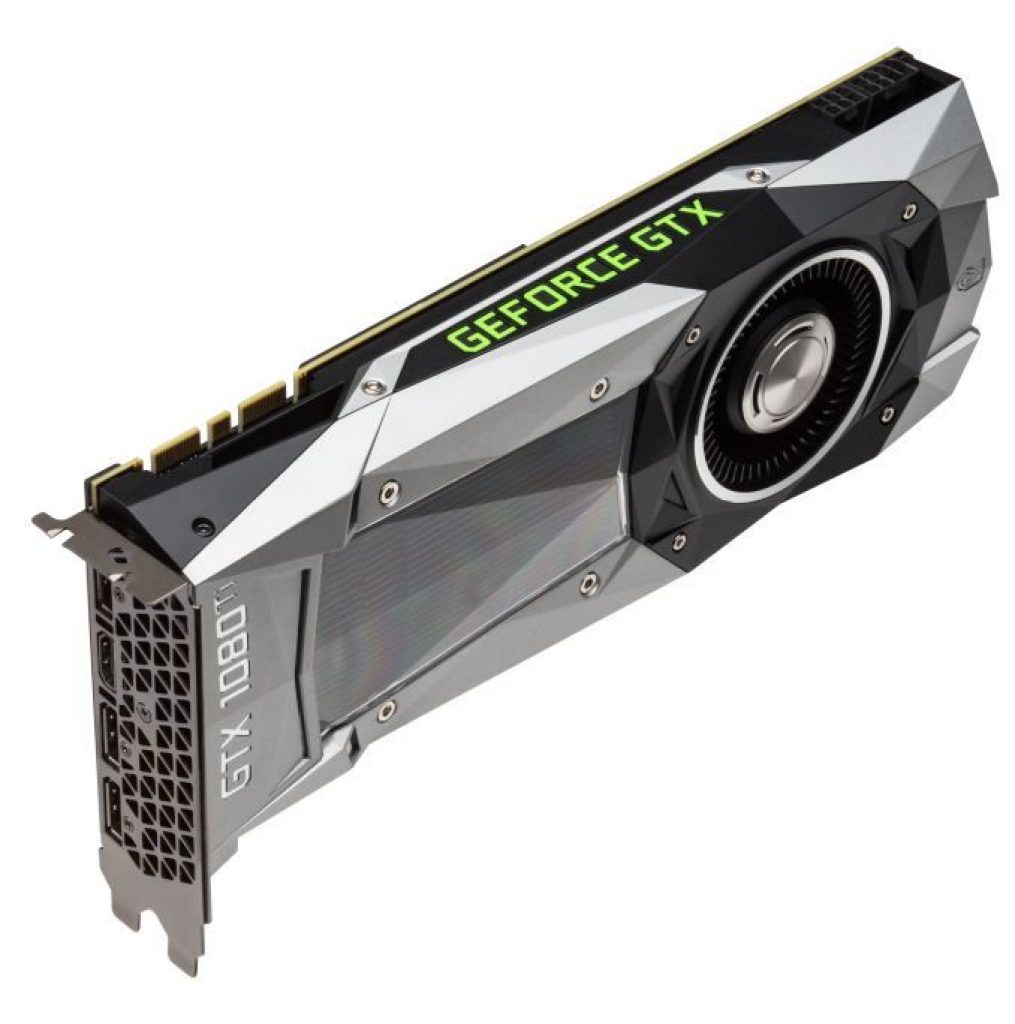 You will not be disappointed by the performance of the Nvidia GeForce GTX 1080 on this PC. This desktop PC will handle any graphic-intensive tasks with ease. For instance, Battlefield 1 gives about 30 frames per second at 4K resolution. The war-torn terrain and snowy alps will be rendered at stunning displays.

For 1440p gaming, this gaming powerhouse can give you a smooth 60 fps. Rise of the Tomb Raider will play at 60 fps at 1080p resolution on maximum settings. Hitman gives you an even more continuous 90 fps at the same resolution and on maximum settings. The Y900 Lenovo Razer PC is VR enabled scoring high in various performance tests.

It is on the same level in terms of VR performance as the Predator G1 and the Aurora. To visualize the raw performance of the GTX 1080, it is best to make some comparisons. Take the GTX 1070, for instance.

Machines with this GPU tend to range between a score of 10 or 11 in the Valve Performance test. The much older GTX 970 GPUs average a score of 6 at best. Therefore, the Lenovo Razer PC GTX 1080 GPU is a much better performer in all these tests. 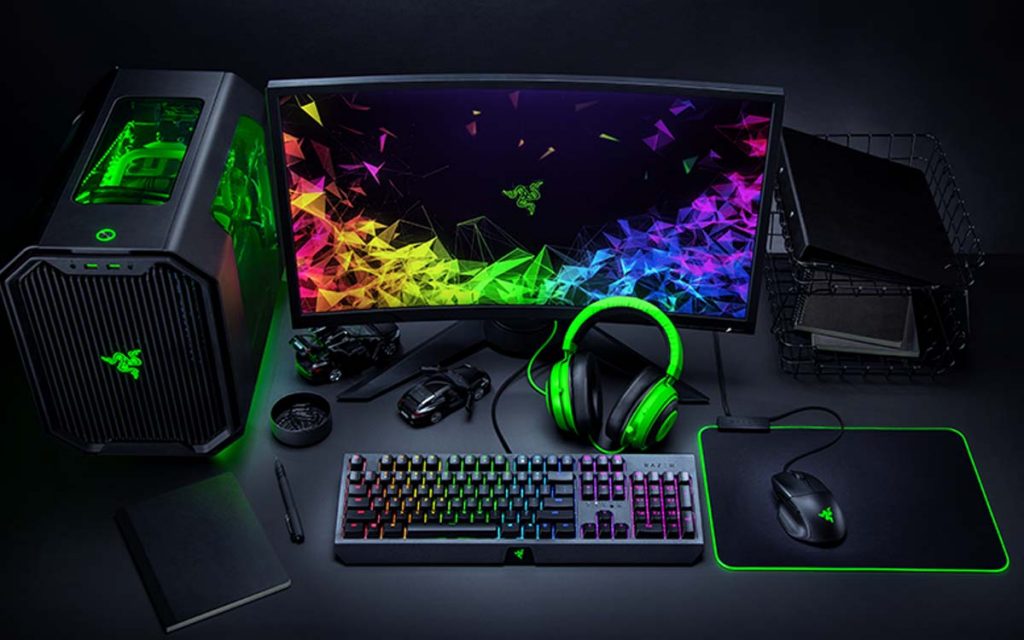 For most of the gaming desktops out there, peripherals aren’t a priority. However, the Y900 Lenovo Razer PC uses peripherals as their primary marketing strategy. This graphical powerhouse ships in with the highly-rated BlackWidow Chroma keyboard with an excellent top-notch design.

It also includes a mouse dubbed the Mamba Tournament Edition. These added peripherals are guaranteed to cost you a little over $215 if bought separately. The Mamba and BlackWidow are often high up the ranks in the realm of mice and keyboards. It is evident to see how that came to be. 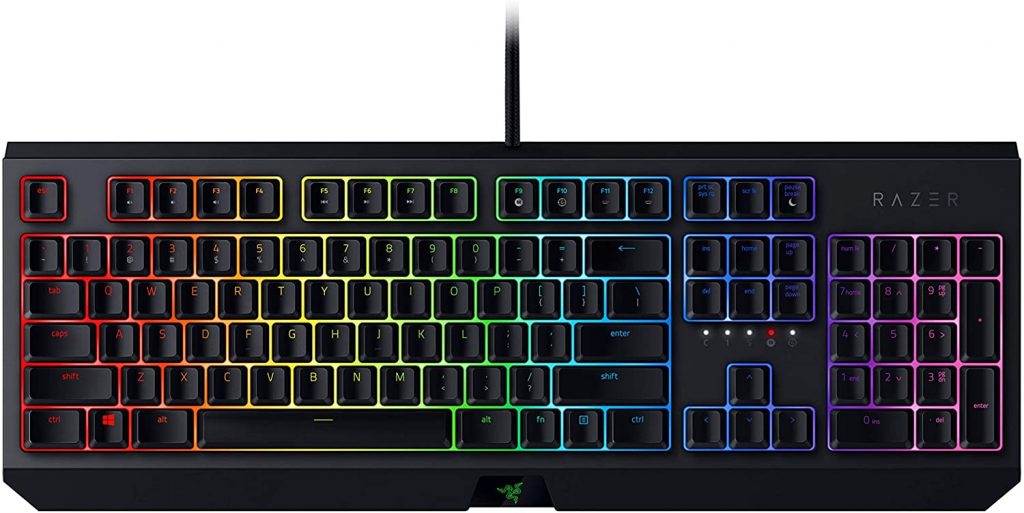 The robust mechanical keys on the BlackWidow, combined with a programmable macro button configuration, will perform just as you would like. Typing tests determined that an average person could type up to 93 words in a minute. The typing accuracy is on another level with high-end keyboard technology on this PC.

The Mamba Tournament Edition mouse is very comfortable and responsive. The ergonomic design is what sets it apart from standard mice. There are two buttons on the left that you can access using your thumb. The sensitivity can be adjusted using the DPI button at the center as you play from the Lenovo Razer PC.

The synapse app on your PC comes in handy when customizing these devices. Besides the lighting effects, you can use the program to configure every button on the Mamba mouse. You can also exploit the settings to create shortcuts and specific gaming profiles.

This approach is useful since you can launch your favorite games using the parameters you’ve made for yourself. Games such as Call of Duty: Black Ops 3, Rise of the Tomb Raider, and Overwatch have custom lighting capabilities that you can activate whenever you play them on the Lenovo Razer PC. 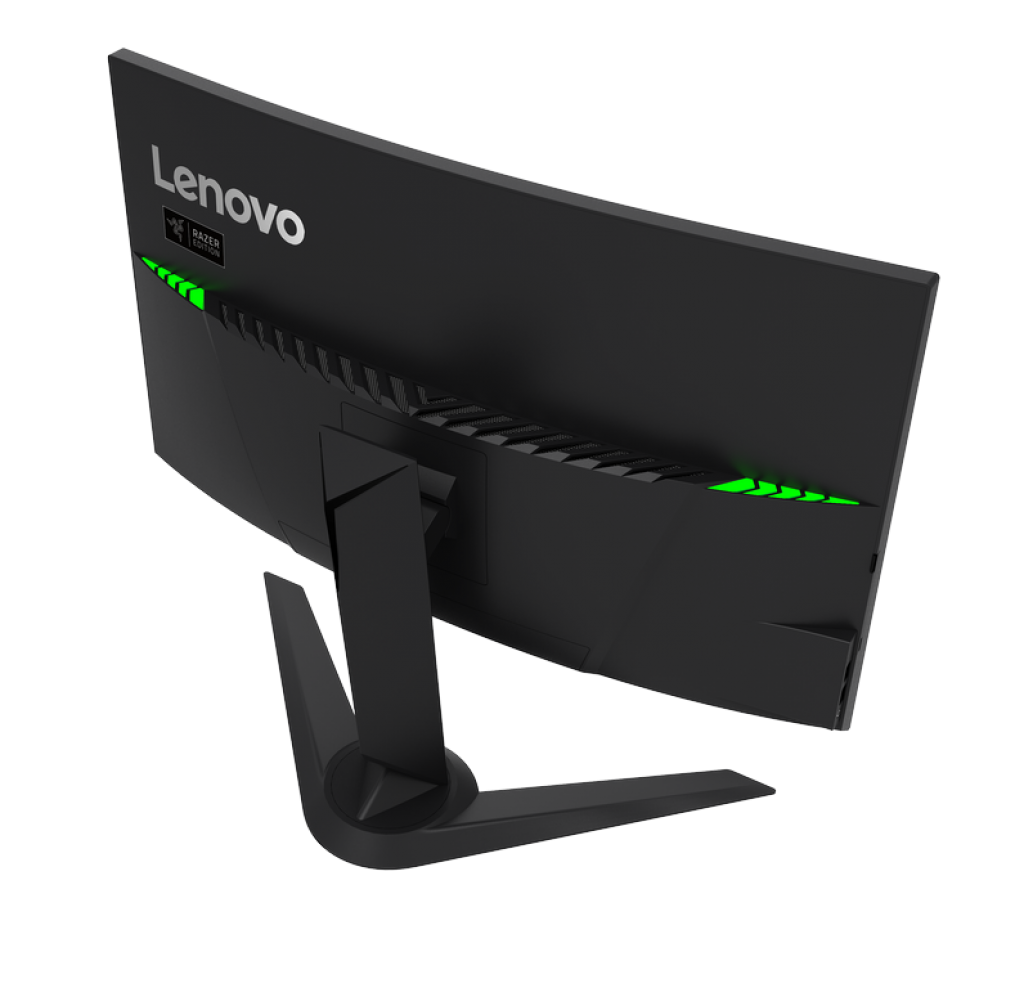 The Y900 Lenovo Razer PC has remarkable lighting effects with amazing add-ons for peripherals. The 4K gaming capability gives you value for the money spent on this computer.

The main strong points for the Lenovo Razer PC are:

However, the Lenovo Gaming PC is quite high on the price end and is much heavier than most other brands in the market.

Despite the price, the Lenovo Razer PC gives you a high level of performance, ensuring that you enjoy a crisp gaming experience. The CPU and GPU are easily upgradeable should you want to revamp your Y900 Lenovo Razer PC.