Final Fantasy is one of the main representatives of RPG videogames (Role Playing Game) since this legendary saga has had great games that have not only been excellent but have also generated a great impact on the history of videogames.

As expected, this long-lived saga belonging to Square Enix has also tried to venture several times into the popular MMORPG genre, which allowed the development of two outstanding games in this genre: Final Fantasy XI and the current Final Fantasy XIV.

Final Fantasy XIV (abbreviated as FFXIV) is the current MMORPG that represents this saga, which during its nearly 10 years of activity has improved greatly with each of its expansions to become one of the best MMORPGs today and also one of the most successful with over 20 million players.

The world of FFXIV is full of interesting content that all its players can enjoy equally. However, this MMORPG also has several items or Easter Eggs dedicated entirely to the great fans of Final Fantasy, as they reference quite memorable elements of the previous videogames of this saga. That said, below are some Easter Eggs that have been found in FFXIV, which allude to the most important games in this legendary saga of Square Enix. 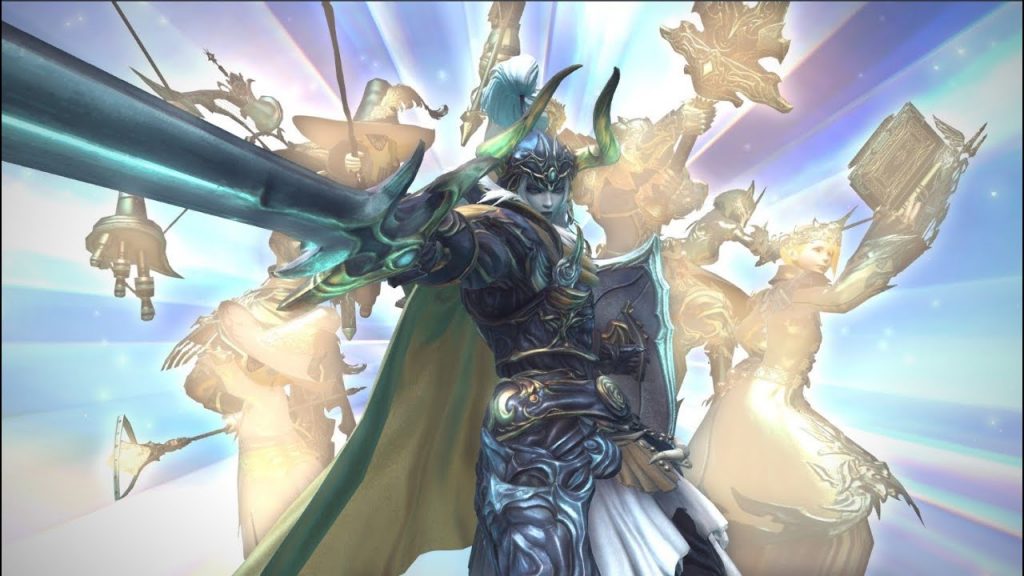 The Shadowbringers expansion of FFXIV introduced several references of the first Final Fantasy videogame released in 19 since Shadowbringers introduced the so-called “Warriors of Light,” which are the heroes of the classic RPG, although clearly, they are not exactly the same characters if they have enough similarities with the originals.
But, for those nostalgic players who want to relive the experience of controlling a Warrior of Light again, FFXIV has an Easter egg that is a full set of armor that alludes to those warriors of the first FF, which can be obtained in the Labyrinth of the Ancient alliance raid.

The appearance of Yojimbo from Final Fantasy X

Final Fantasy X is another quite important game in this saga and one of the many reasons for this is its charismatic characters. Those who played FFX will recognize the appearance of Yojimbo in FFXIV, which makes his appearance as an Easter egg in the Stormblood expansion of this MMORPG, specifically in the Hildibrand questline. Yojimbo is one of the main invocations of FFX, which is characterized by loving gil (the common currency of FF), and in FFXIV Yojimbo continues to maintain this characteristic, but this time he works as a bodyguard for some rich merchants.

Battle against a boss from Final Fantasy IV 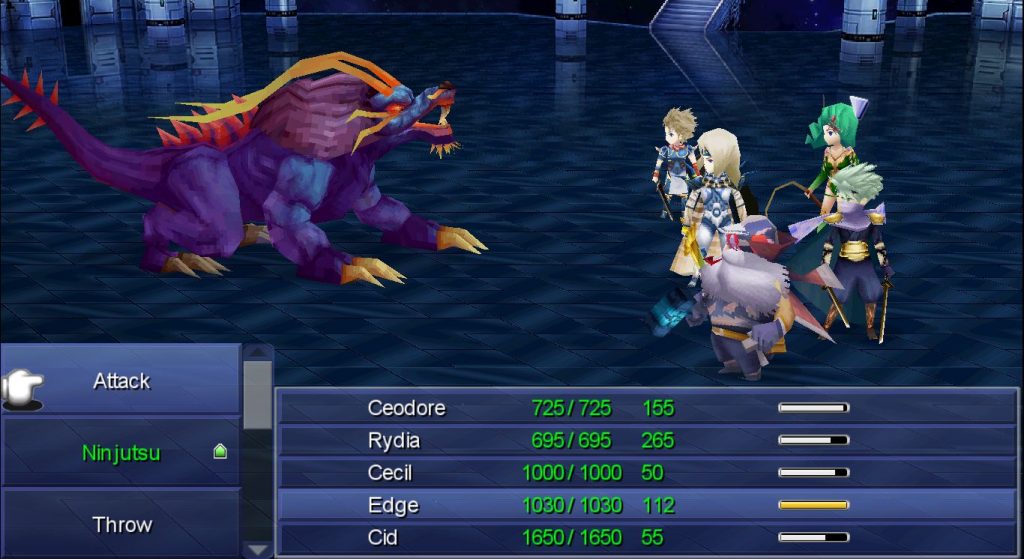 Final Fantasy IV is another of the most remembered games of the saga since it was the first one to tell a deep story and because of its quite revolutionary combat system for its time. One of the most memorable moments of FFIV is the battle against Calcabrina, a boss that appears in a collection of dolls before becoming a monster to attack the players. Calcabrina also made his reappearance in FFXIV during the Heavensward expansion, where players can fight this giant doll again in the Antitower dungeon.

Bosses and soundtracks from Final Fantasy VI in The Omega: Sigmascape raid

Final Fantasy VI is considered as one of the best Final Fantasy of the history, so the references for this game in FFXIV were already quite evident. It was in the Stormblood expansion where many references and Easter eggs of FFVI were introduced, thanks to The Omega: Sigmascape raid. This FFXIV raid has some memorable FFVI bosses like the huge Phantom Train and Kefka, the famous main antagonist of this game. The FFVI bosses included in this MMORPG will also have a remix of their original soundtracks, which will only be recognized by those who enjoyed the classic game. Another interesting Easter egg that alludes to FFVI is the Magitek Armor created by the Garlean Empire in the FFXIV: A Realm Reborn story. 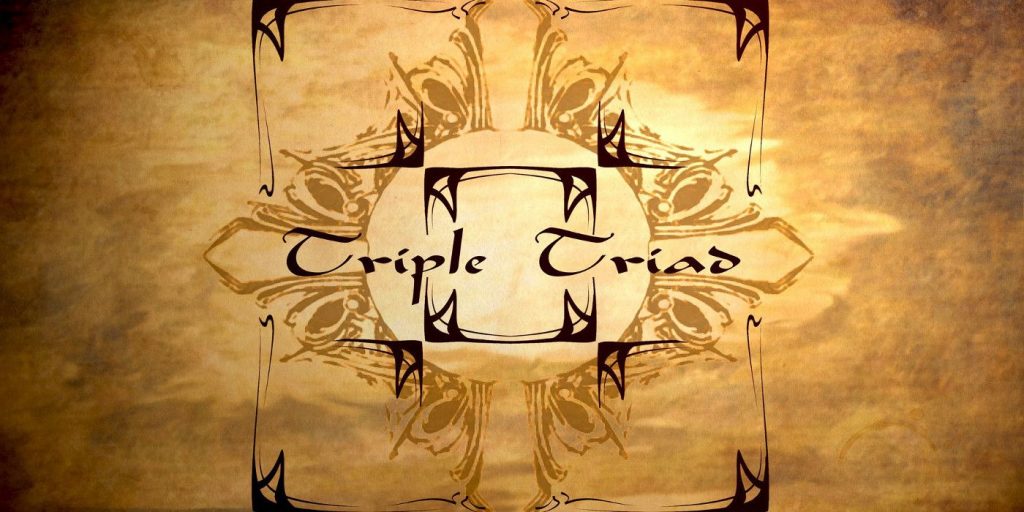 Another element of Final Fantasy XIV that alludes totally to FFVIII is the Triple Triad, a mini-card game that many players enjoyed at the time since its mechanics were very addictive. The Triple Triad of FFXIV maintains practically the same gameplay of the original version, however, this time the online features of FFXIV are taken advantage of, since players will be able to challenge others around the world during events that are held monthly, and with very good prizes for the winners.

Final Fantasy VII is undoubtedly the most popular game of the saga due to its great quality, its memorable moments and for being the first FF to reach the West. This popularity has remained constant until today thanks to the excellent FFVII Remake, which was released months ago.

One of the most memorable battles of the original FFVII is precisely the first boss of the game: the Guard Scorpion, and it turns out that in FFXIV nostalgic players can relive this fight in the Ala Mhigo instance as the first boss to be faced, although its name was changed in the West to The Magitek Scorpion, in the Japanese version continues to maintain the name of Guard Scorpion. In addition, during this combat, the players will be able to hear a callback warning not to attack the Scorpion when it raises its tail, and it turns out that such a call also occurs in the original FFVII, which complements very well the reference of this Easter egg. 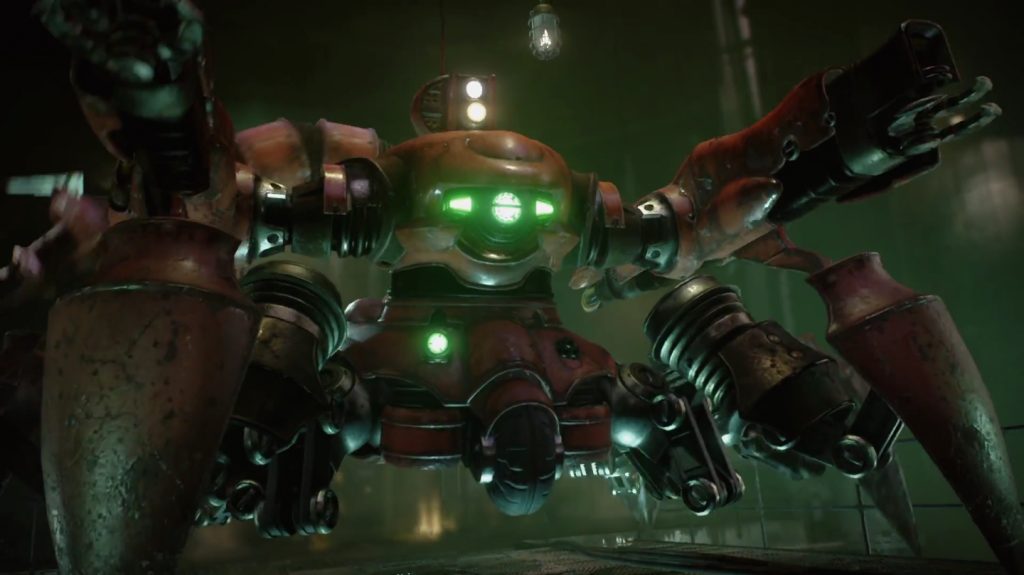 Guard Scorpion also makes an appearance in the Ghimlyt Dark, the dungeon ending of FFXIV’s Stormblood expansion, but this time under the name of Schola Scorpion and practically consists of a weak version of the Mhigo boss Wing.

FFXIV: Shadowbringers is one of the most recommended MMORPGs currently, however, it should also be mentioned that the best moments of FFXIV are available when players get a high level, so it is recommended to focus on increasing the level and get a lot of Gil quickly when you are starting in this MMORPG, and the best way to achieve this is without a doubt, by choosing to buy

FFXIV Gil on websites such as Eldorado.gg, which is a highly recommended Marketplace where users can acquire any currency of the most popular MMO games and with the best offers, since its search system adjusts to the needs of each buyer.

Those were some of the most interesting references and Easter eggs that can be obtained in Final Fantasy XIV, which allude to the most important videogames of this legendary franchise. That said, it is clear that FFXIV is a great MMORPG full of content and details that can be enjoyed by both new players and more veterans in the Final Fantasy saga.