What are the 10 Fastest Kentucky Derby Competitors of All Time?

However, the top performances push that time down under 2:01:00. If a horse runs a time like that they will find themselves in the record books. 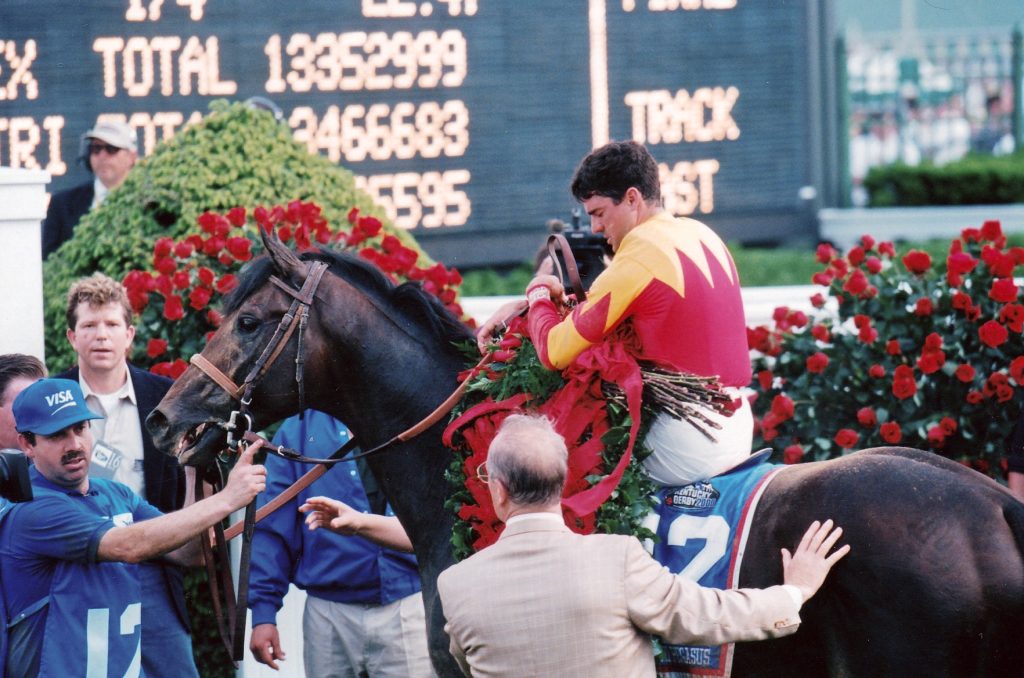 On May 6, 2000, Fusaichi Pegasus went off from the fifteenth post position at 2-1 odds favorite. Immediately breaking to the inside, Fusaichi Pegasus sat in a stalking position near the rail for much of the race, just behind the leaders. On the final stretch Fusaichi Pegasus shoots to the outside and accelerates to win by a length and a half over Aptitude.

Fusaichi Pegasus legacy continues as he is one of the most expensive horses of all time. Originally purchased as a yearling for $4 million he was later sold to stud for a record $70 million. Fusaichi Pegasus also broke a long streak of favorites being upset in the Kentucky Derby. Before him the last favorite to win it was Spectacular Bid in 1979. 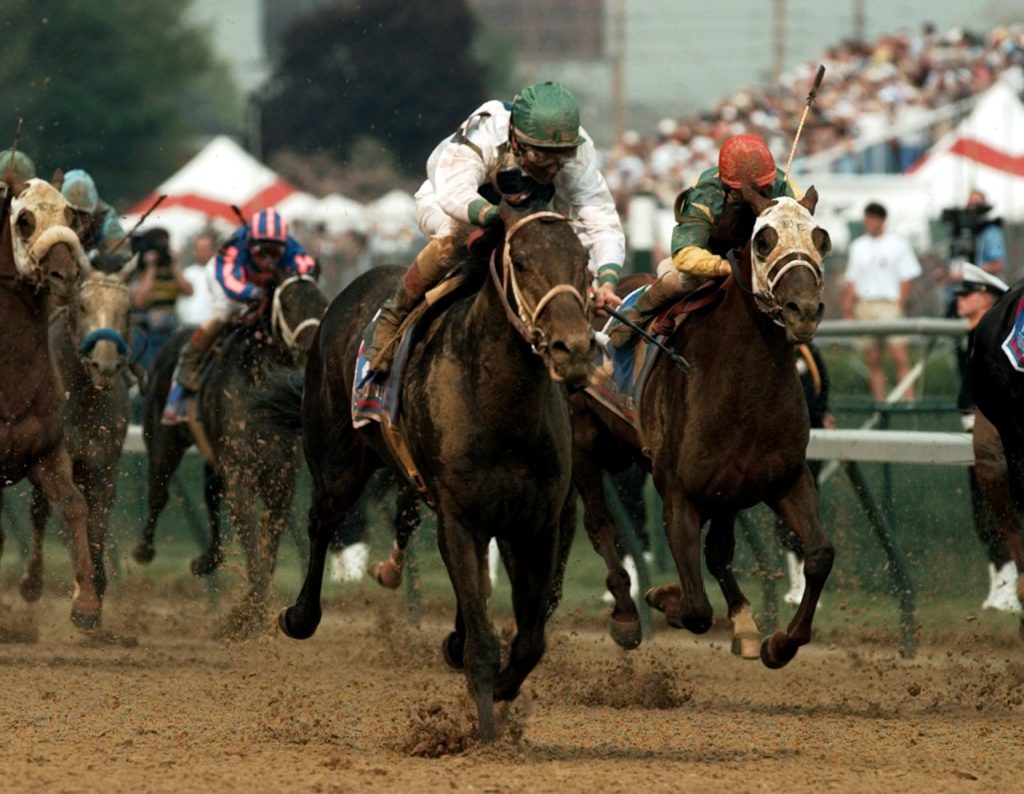 The favorite for the 1996 Kentucky Derby was Unbridled Song who went off at 7-2. However, a cracked hoof in the weeks leading up to the race hurt his performance. Instead, another horse sired by Unbridled won the race. Grindstone again started from the fifteenth post position and at 6-1 odds managed to squeak out a win by a nose over Cavonnier.

The most recent entry on this list and probably the most controversial record on this list, is Medina Spirit’s 2:01:02 in last year’s Kentucky Derby. After crossing the line first, last May 1st, nothing seemed to be controversial at that time, with Mandaloun finishing second by half a length. This was also Bob Baffert’s record 7th Kentucky Derby win, however that did not stand.

One week after running a post-race drug test on Medina Spirit showed that Medina Spirit had an overage over betamethasone in his system. This warranted the stewards earlier this year disqualifying Medina Spirit and naming Mandaloun the winner of the derby.

This race and the overage are still in the process of appeals as of the writing of this article. As it stands right now Medina Spirit still holds this record and it stands at 8th fastest all time.

The Kentucky Derby, typically the first Saturday in May, changed in 2020. Instead because of the COVID-19 Pandemic the race was moved to be run in September and also be the second leg of the Triple Crown as the Belmont Stakes was still run in June. The Belmont Stakes is run first we already had a Triple Crown hopeful in Tiz the Law going off at below 1-1 odds.

Authentic was the third favorite at 8-1. Despite the heavy favorite and poor stop by Authentic, he quickly bounced back to lead through a fast quarter mile. Despite slowing late and having Tiz the Law right behind him he was able to close out and win in 2:00:61. After the derby, Authentic went on to win the Breeders’ Cup Classic and won Horse of the year for 2020. 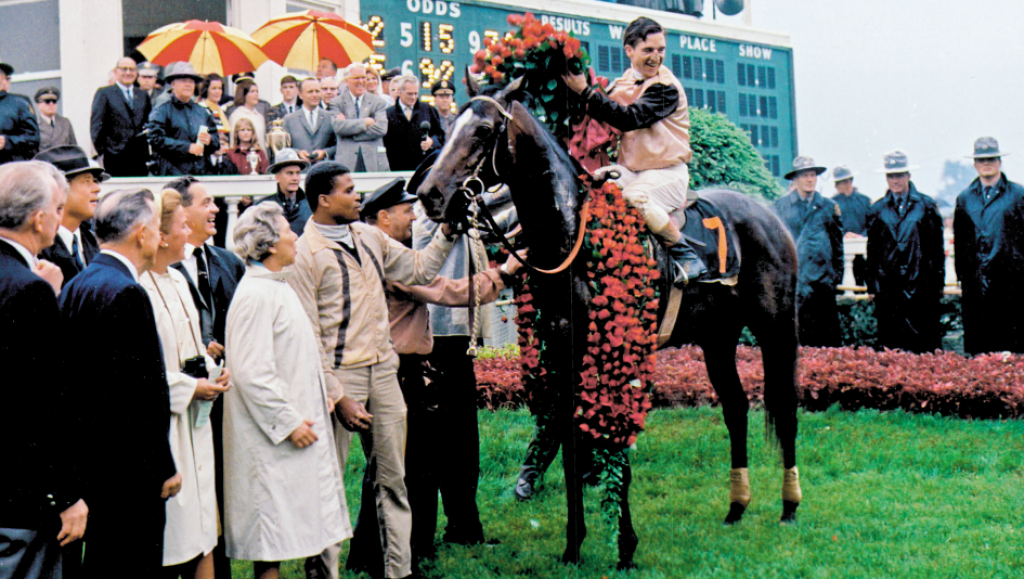 Proud Clarion had a disappointing two-year-old season and was believed to not have been living up to his pedigree potential. His three-year-old season was a little better but still not outstanding. Therefore, when it came to the Kentucky Derby, he was given very little attention by the betters, who focused more on the favorite Damascus. From the seventh post position and at 30-1 odds Proud Clarion shocked everyone for a huge upset victory and an impressive sixth fastest time.

This upset is even larger when you just see how impressive Damascus was in the 1967 season. Other big stakes victories by Damascus in 1967 include Wood Memorial, Travers, Preakness Stakes, and Belmont Stakes. Despite all these performances, an incredible race by Proud Clarion kept Damascus from winning the Triple Crown. Decidedly had a lot to live up to in his Kentucky Derby performance, as his sire Determine was the winner of the Kentucky Derby eight years prior, in 1954.Determine ran the race in 2:03:00 and became the first gray horse to ever win the Kentucky Derby. Decidedly not only matched him with his gray coat but also in his speed. At the time, the 2:00:40, was the fastest time from ten furlongs at Churchill Downs. Decidedly also set the record for 8.5 furlongs at Keeneland in 1963. 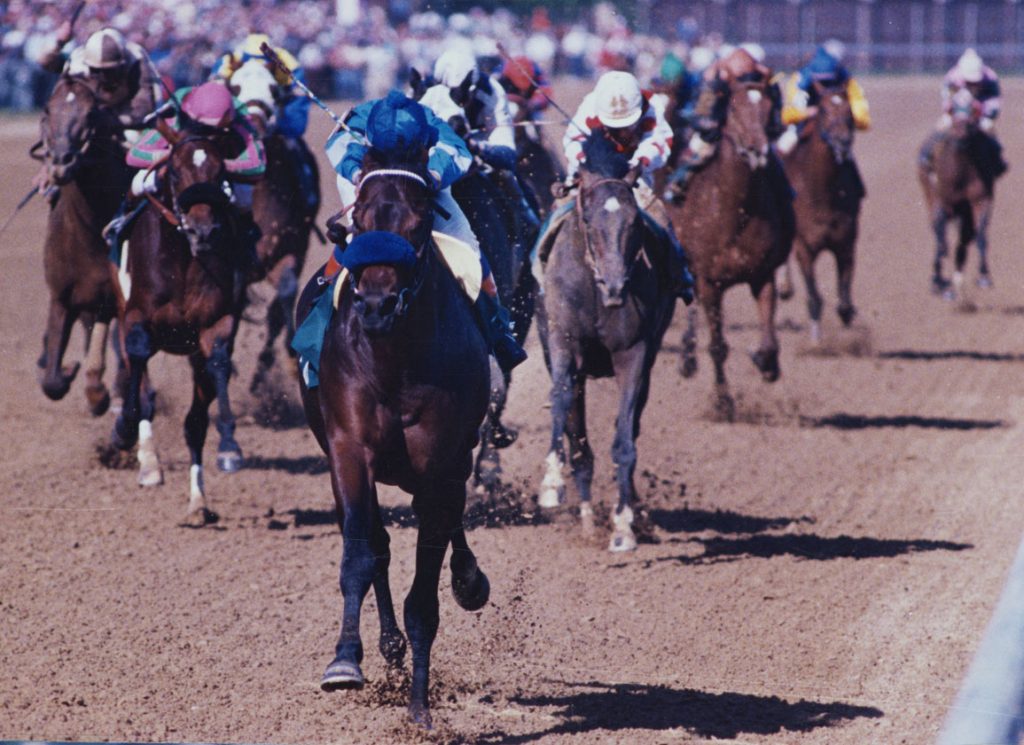 Spend a Buck absolutely dominated in the 1985 Kentucky Derby-winning by 5 ¾ lengths over Stephan’s Odyssey. A horse the good certainly has a shot at winning the Triple Crown. Spend a Buck did, but owner Dennis Diaz opted to race him in the Jersey Derby.

For a long time, Kentucky Derby horses were chasing the two-minute mark. After Decidedly, two years earlier, bringing the record all the way down to just 2:00:40, Northern Dancer finished the race in two minutes flat.

Despite his strong future and good pedigree, Northern Dancer was not bought at his yearling sale. He was born late into the breeding season and was not of large size. Despite being a small horse, he set the two-minute time and had an amazing career outside of the derby. 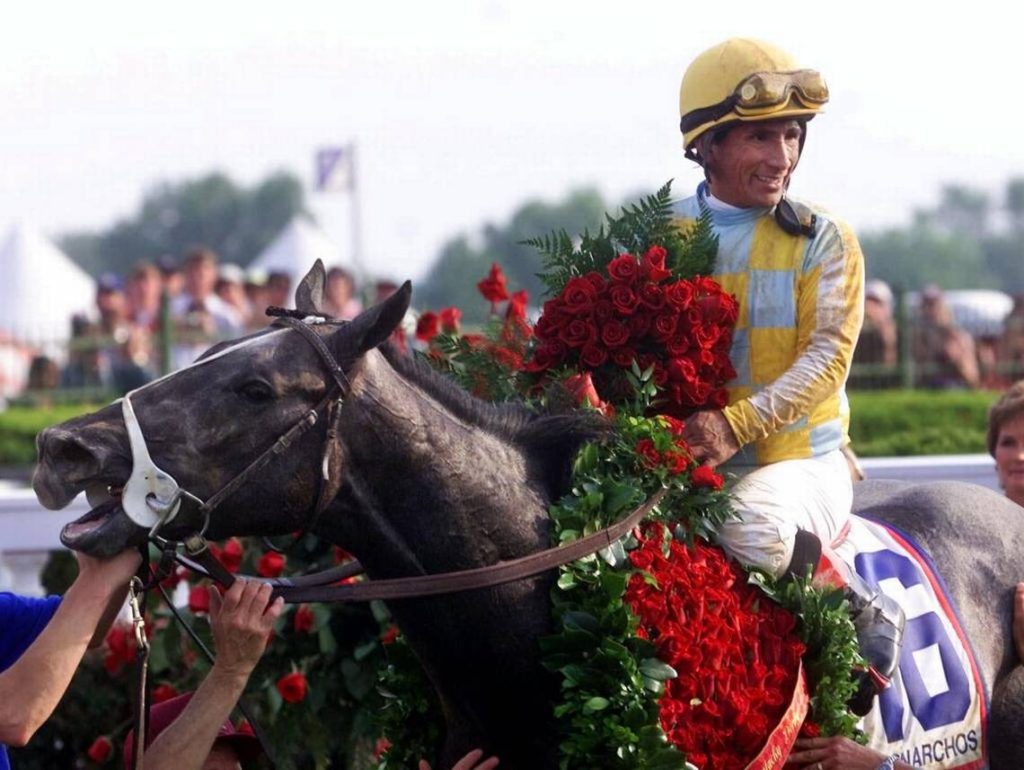 The 2001 Kentucky Derby was the first one to be broadcasted on NBC got the rights from ABC. For the first broadcast by NBC, Monarchos did not hold back on the theatrics. Never even coming close to the front of the race with only a quarter of a mile to go, in 13th place, Monarchos made his move.

He surged to the front of the field and not only won the race but became only the second horse to officially break the two-minute barrier. Monarchos after the Kentucky Derby never won another race and retired early into his four-year-old season. 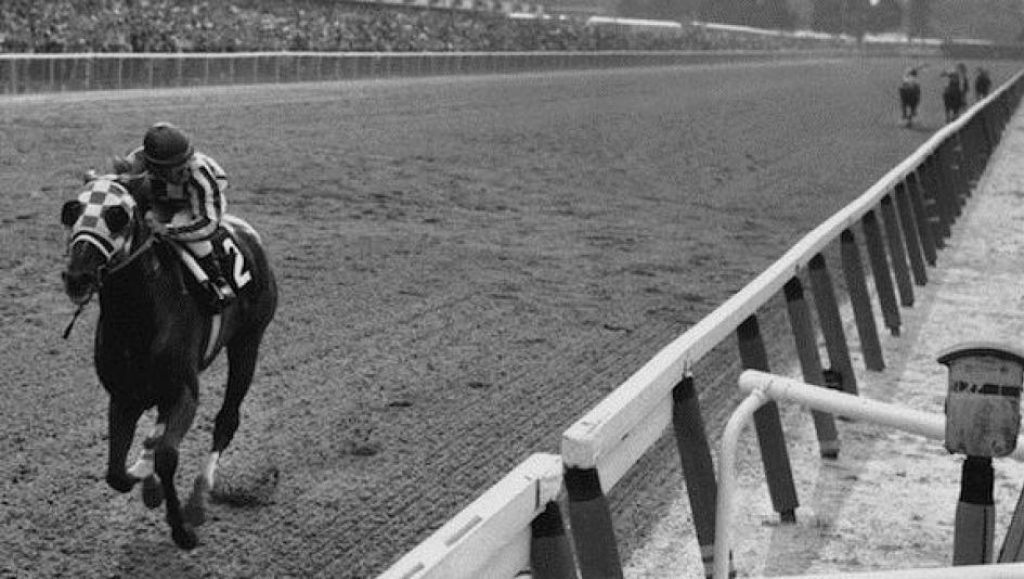 Big surprise, right? The greatest horse of all time and Triple Crown winner, Secretariat, ran the fastest time ever in the Kentucky Derby. He was also the first horse to ever break the two-minute barrier and broke Northern Dancer’s nine-year standing record. Secretariat went off as the favorite for the race and won by two and a half lengths. Secretariat was not fast out of the gate but throughout the entire race was easily passing everyone else.

On the final stretch, he passed his rival Sham and no one could catch back up. In the Preakness Stakes, an easy win by two and a half gave Secretariat two-thirds of the triple crown.

Finally, in the Belmont Stakes, Secretariat raced one of the most impressive races of all-time winning by a record 31 lengths. Secretariat set the record for both other triple crown races as well as the Kentucky Derby. The only way another horse could ever match Secretariat’s performances is if they are also one of the greatest horses of all time.

The rival of Secretariat, mentioned in the above paragraph, unofficially holds the record for the second-fastest time ever. This is because only the winning times are kept track of in horse racing. However, estimates assume he would have run the race in 1:59:80. Even more shocking, Sham smacked into the starting gate at the beginning of the race losing a tooth in the process.

This slowed him down and it makes you wonder how fast he could have gone. On top of his Kentucky Derby performance, he again finished second to Secretariat in the Preakness Stakes.

Again, he unofficially set the fifth-fastest time. Once more the two battled in the Belmont Stakes. Both were at an insane pace huge lengths ahead of the rest. Sham however could not keep up that long and fell back as Secretariat accelerated further away.

Both Authentic and Medina Spirit cracked the top ten in the last two years. This raises the question of for the third year in a row a horse can make their way onto this list. Top picks to win this year’s Kentucky Derby include Smile Happy, Forbidden Kingdom, and Classic Causeway. You can click here and find the complete list of contenders on the TwinSpires website.

Still with the Kentucky Derby over a month away and some big prep races still to go the three favorites can change. Most of the prep races for the derby are not ten furlongs like the Kentucky Derby. So, for many of these horses, it will be their longest race and it is hard to predict their times. Still possible for us to see the third year in a row of a top ten performance.